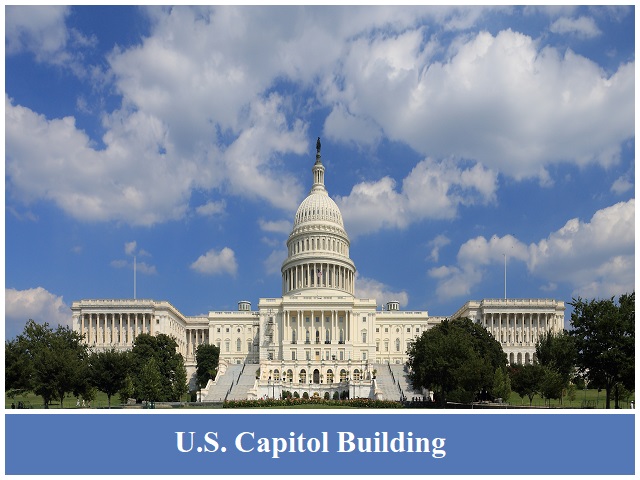 On 6 January 2021, the United States Capitol was attacked by a mob of rioters in an effort to prevent Congress from formalizing Joe Biden’s victory. However, this was not the first time that the U.S. Capitol was attacked. Throughout history, it has been obliterated by fire, reconstructed, expanded and restored. In this article, we have provided some interesting facts on the U.S. Capitol along with its history of evolution.

Who is Joe Biden's running mate Kamala Harris and what is her Indian connection?

1- The U.S. Capitol Building is located at 100 Constitution Avenue NW in Washington, DC and is the meeting place of the U.S. Congress. It has more than 540 rooms and 658 windows.

3- In 1899, a law was passed that restricted any building in D.C. from being built taller than the Capitol. The building could be equal to the Capitol Building. However, this law was amended in 1910.

4- At present, the U.S. Capitol is the fifth-tallest building in D.C. and is shorter than the Washington Monument, the Basilica of the National Shrine of the Immaculate Conception, the Old Post Office and the Washington National Cathedral.

5- There were plans to bury the first President of the U.S. under the Capitol building in an area called the Crypt. However, the plan failed as President Washington's will specify that his final resting place should be Mt. Vernon. Currently, the Crypt houses a gift shop and some of the National Statuary Hall Collection.

6- Since 1909, the Capitol Building has its own Subway to carry politicians from House and Senate office buildings to the Capitol.

7- The heart of the Capitol is Rotunda. It is a large, domed, circular room located in the centre of the U.S. Capitol. It is 180 feet high and 96 feet in diameter. 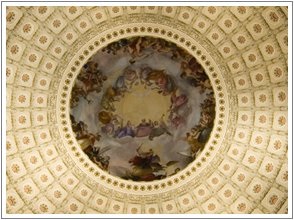 8- The National Statuary Hall or the Old Hall of the House (1809-1857) holds Capitol's collection of statues of notable citizens in U.S. history (two citizens per state).

9- Constantino Brumidi designed the murals along the walls, hence the name  Brumidi Corridors.

10- In November 1800, the U.S. Congress met in the first completed portion, the north wing.

11- The Capitol Building faces away from the Mall instead of towards it. This is because the East side of the Capitol is the only one with the level ground for a proper entrance. Thus, the Capitol and the statue on top face East towards the people who are entering it.

12- The famous dome was not added to the Capitol Building until the 1850s. The construction of this dome took 11 years and nearly nine million pounds of iron. It is interesting to note that President Abraham Lincoln was sworn in under a half-finished dome.

13- The Capitol is maintained by Architect of the Capitol (AOC). The current AOC is Stephen T. Ayers. The first AOC was  Dr. William Thornton in 1793.

14- When Pierre Charles L’Enfant, city architect, found the area in the early 1790s, it was then known as Jenkins’ Hill and not the 'Capitol Hill'. The architect proclaimed it as "a pedestal waiting for a monument".

15- When the Capitol Building was burned down during the War of 1812, the old brick Capitol was built for the use of the Congress. It is now occupied by the Supreme Court building. The old Capitol was used as a prison for blockade runners, prisoners of war, spies, and Union Army officials convicted of insubordination in the past.

History of the U.S. Capitol Building 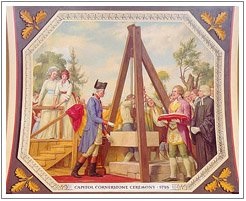 On 18 September 1793, George Washington laid the U.S. Capitol cornerstone at the southeast corner of its foundation to mark the structure of the nation's most symbolically significant and architecturally amazing building with great pomp and celebration. It was a Masonic ceremony. The Capitol is the home of the U.S. Congress-- the House of Representatives and the Senate.

Competition for the design of the U.S. Capitol 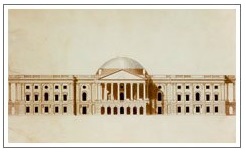 Dr. William Thornton who studied medicine but rarely practised as a doctor won the competition for its design. He placed a central shallow domed rotunda between the Senate (north) and House (south) wings.

Construction of the U.S. Capitol and its architects 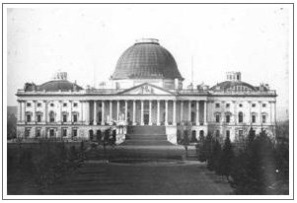 In 1814, the British troops nearly burned the U.S. Capitol to the ground during the War of 1812. A well-timed rainstorm put the fire out, preventing the building to burn down to ashes.

Restoration of the U.S. Capitol with slight modifications

Extension of the U.S. Capitol 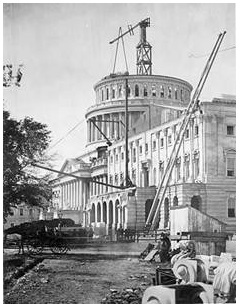 By 1850, the need to enlarge the building became evident following the enormous territorial growth of the nation. At that time, instead of 30 senators, there were 62 senators, and the House had grown from 69 representatives to 233.

In 1897, the Library of Congress was moved into its own building out of the Capitol to make space for new committee rooms and in 1935, Supreme Court moved into its own building. During 1958–1962, the east-central front of the Capitol was extended to add 90 new rooms. In the 20th century, separate buildings were constructed to provide offices and committee rooms for the House and Senate. 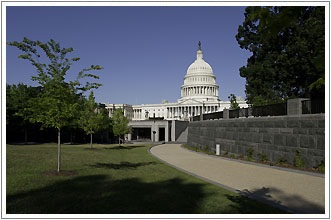 At present, the Capitol complex includes the Capitol, six major House and Senate buildings, three Library of Congress buildings, the Supreme Court Building, the U.S. Botanic Garden, and other facilities. The Capitol Building reigns as a monument to freedom and a reminder of the power of the people.