Features of Smart Coaches in the Indian Railways

Railways play an important role in the life of everyone. Millions of people travel through it every day. In order to make travellers more comfortable in the journey, the Ministry of Railways has built a smart coach, which will provide many types of facilities. Let's study the features of the Smart Coach through this article.

Railways in India are an important part of everybody's life. It is the best and comfortable medium of transportation. It can be easily accessed from anywhere. Indian Railway is an Indian state-owned enterprise, run by the Indian Government through the Ministry of Railways. Let us tell you that the smart coach has been built in the Railways to make the journey of passengers more comfortable.

Indian Railways unveiled its state-of-art coaches built in a modern coach factory, Raebareli. These smart coaches have many new features which will help in increasing the safety of the passengers. According to the Ministry of Railways around 100 smart coaches are being constructed under the pilot project. Let us study about the characteristics of these smart coaches through this article.

Features of Smart Coaches in the Indian Railways

1. These coaches are known as smart because they have some modern sensors that will detect the problem from the compartment to the track and will send all the information with the help of an integrated computer system. These new smart coaches will work on the special diagnostic system. This means that a special vibration sensor has been installed on the wheels of the train, called Self Power Harvesting Sensor. If there will be any defect on the bearings, wheel, and hard spot on the track then they will be able to detect it. After detecting any problem, its alert will be immediately sent to the railway control room.

2. The sensors will also estimate that the track in which the train is passing through is right or not. If there is any scarcity, then the sensor will give this information to the railway, which will also prevent the accidents occurring.

Do you know that some special computers have been installed in these coaches and its speciality is that it is an industrial-grade computer, in which the Geo SIM network has been provided to send reports to remote servers? This device installed in the compartment will collect all the information, including the fund diagnostic system, air-conditioning, disc brake system, fire detection alarm system and water level indication on a platform and will continue to send advance information related to the railway department.

What is the difference between Terminal, Junction and Central Station in Indian Railways? 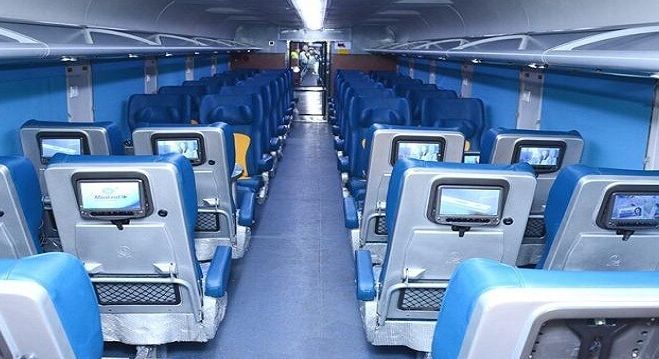 4. The CCTV cameras in the coach have been installed for the safety of the passengers. Let us tell you that CCTV cameras with artificial intelligence capacity have been installed in the coach. This will make it easier to keep track of housekeeping, TT, train pantry, suspicious passengers. The record will remain in CCTV for 30 days, due to which, it will help in solving any case in urgency.

5. The Talkback System for an emergency has also been installed in the smart coach. That is, by pressing the button of this system placed near the passenger toilets of the coach, he or she can talk directly to the guard in an emergency and can take help.

6. Let us see some other facilities provided to the passengers in this coach: Facilities like AC, disc brake system, fire detection, alarm system are given in this coach. Smart coaches have been provided with WiFi, hotspot, information system. Passengers will be able to connect their smartphones with their own hotspot and watch entertainment programs like movie, songs etc.

Now you must have come to know about the Smart Coach in the Railways that will not only provide the security to the passengers but will also tell the location and at what time the train will reach the station etc. which will make the journey more comfortable.