The Convergence Project is the country's first project to generate green energy for rural and agriculture consumption in the state of Goa. It will also unlock multiple benefits of solar energy, battery storage and carbon financing. 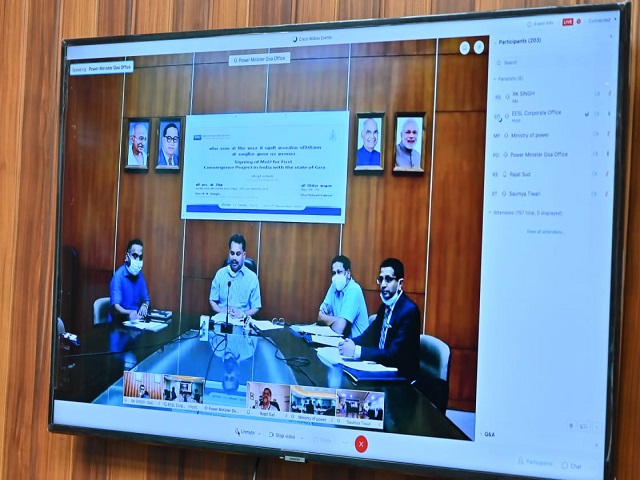 On 17 November 2020, Energy Efficiency Services Limited (EESL), a joint venture of Public Sector Undertaking (PSU) under the Ministry of Power and Department of New & Renewable Energy (DNRE), Goa, signed an MoU to discuss rolling out of India’s first Green Energy Convergence Project in the State.

It is the country's first project to generate green energy for rural and agriculture consumption in the state of Goa and is in line with the International Solar Alliance, a GOI initiative.

The Memorandum of Understanding (MoU) was signed in August 2020 in the presence of R K Singh, Union Minister of State (IC) for Power and New & Renewable Energy, Nilesh Cabral, Power Minister, Goa, Sanjiv Nandan Sahai, Secretary, Ministry of Power and other senior officers of the Ministry.

Speaking on the occasion, R K Singh, Minister (IC) for Power and New & Renewable Energy stated that the MoU signed between EESL and Government of Goa today in some sense marks beginning of the fresh green revolution.

"We believe that in a solar power rich country like India, the effective harnessing of this abundant resource can yield handsome returns for all stakeholders," said Sanjiv Nandan Sahai, Secretary, Ministry of Power.

Highlights of the Project

1- As per the MoU, EESL and DNRE will carry-out the feasibility studies and subsequent implementation of decentralized solar energy projects.

2- EESL shall implement solar projects as listed below:

(i) It will establish 100 MW of decentralized ground-mounted Solar Power projects on government lands for agricultural pumping.

(iii) It will also distribute around 16 Lakh LED bulbs for rural domestic households.

3- To provide clean power at affordable rates in the state, EESL will install solar projects in a first of its kind large scale programme where vacant or unused land provided by the Gram Panchayats or the electricity board will be utilized.

Aim of the project:

The convergence Project of EESL aims to connect sectors like Solar Energy, Energy Storage and LED lights to enable decarbonisation and provide access to affordable energy.

What are the benefits associated with the project?

The benefits associated with the projects are as follows:

1- It will promote the usage of renewable energy sources, especially for agricultural and rural power consumption in Goa.

2- It will also contribute to overall sustainability by deploying energy-efficient pumping and lighting.

3- The solar power plant will be installed near the substation, improving the health of DISCOMs to supply power during the day time, reducing transmission and distribution losses. The project will accrue savings of INR 2,574 crores to Goa over a period of 25 years.

Energy Efficiency Services Limited (EESL) is a joint venture of  National Thermal Power Corporation Limited (NTPC) Limited, Power Finance Corporation, Rural Electrification Corporation and POWERGRID. It was set up under the Ministry of Power to facilitate the implementation of energy efficiency projects.

EESL is a Super Energy Service Company (ESCO) that seeks to unlock energy efficiency market in India, estimated to at Rs. 74,000 crore that can potentially result in energy savings of up to 20% of current consumption, by way of innovative business and implementation models. It also acts as the resource centre for capacity building of State DISCOMs, ERCs, SDAs, upcoming ESCOs, financial institutions, and so forth.

EESL has been one of the pioneers in the implementation of decentralised solar power in India and with this project, the country will unlock multiple benefits of solar energy, battery storage and carbon financing.

Rewa ultra mega power project: Here's what you need to know about the first solar project in India