What is the Grand Ethiopian Renaissance Dam (GERD) project?

The Grand Ethiopian Renaissance Dam (GERD) is a gravity dam on the Blue Nile river in the Benishangul-Gumuz Region of Ethiopia and is under construction since 2011. 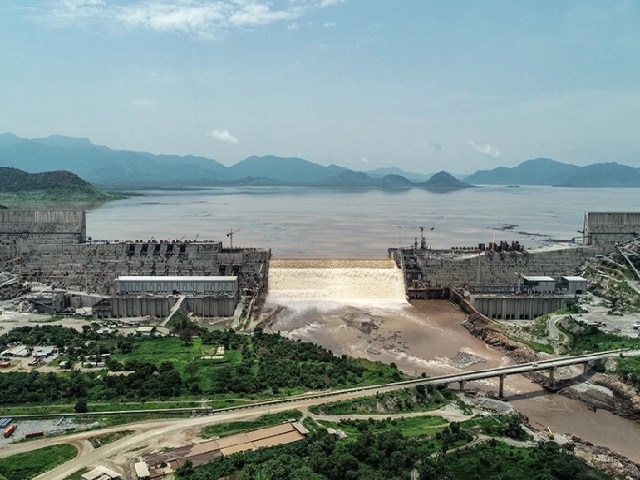 On 3 January 2020, Egypt, Ethiopia and Sudan agreed to resume their yearslong negotiations over the controversial building of the Grand Ethiopian Renaissance Dam hydropower project. This comes six weeks after Sudan boycotted last round of discussions.

The latest round of talks amid the ongoing COVID-19 pandemic between Ethiopia, Sudan and Egypt was held via video conference. The proceedings were observed by South Africa (current head of the African Union’s rotating council) and other international observers.

1- GERD is a 6,450 MW hydropower project on the Blue Nile in Ethiopia.

2- It is located about 30 km upstream of the border with Sudan.

6- It is owned and operated by Ethiopian Electric Power Corporation.

7- The project involves the construction of the main dam in Roller Compacted Concrete (RCC) along with two power stations installed at the foot of the GERD.

8- The power stations are located on the right and left banks of the Nile river, comprising 16 Francis turbines.

Identification of the site

During the reign of Emperor Haile Selassie, the site for the construction of the Grand Ethiopian Renaissance Dam was identified by the United States Bureau of Reclamation in its Blue Nile survey (1956-1964). However, due to the coup d'état of 1974, the project failed to progress.

Survey of the site

In October 2009 and August 2010, the site was surveyed by the Ethiopian Government and a design for the said dam was submitted in November 2010.

On 31 March 2011, the contract of USD 4.8 billion was awarded without competitive bidding to the Italian company Salini Impregilo (present-day Webuild). On 2 April 2011, the then Ethiopian Prime Minister Meles Zenawi laid the foundation stone for the dam.

Controversy over the project

The contention of Ethiopia and Egypt's demand

In response to Egypt's criticism, Ethiopia contended that the dam would regulate water for irrigation and increase water flows to Egypt by reducing evaporation on Lake Nasser. Amid this, Egypt demanded an increase of 24% of its share in the Nile's water flow (from 66% to 90%).

Approval of the dam by Egypt and signing of the agreement

In May 2011, Egypt approved the GERD project. Egyptian Prime Minister Essam Sharf and his Ethiopian counterpart agreed for the examination of blueprints by an  Egyptian technical committee so that downstream impact could be examined. Additionally, an agreement was inked that Egypt and Sudan will buy electricity from Ethiopia’s power station in Mendaya-- 1200 megawatts to Sudan and 2000 megawatts to Egypt.

The said dam was originally called 'Project X' and was later renamed to Millennium Dam after the contract was awarded. In April 2011, the dam was renamed once again to 'Grand Ethiopian Renaissance Dam' by Ethiopian Council of Ministers. The dam was slated for completion in July 2017 but failed to meet the deadline.

Talks over GERD reached a deadlock

In October 2019, Egypt stated that the talks with Sudan and Ethiopia over the Grand Ethiopian Renaissance Dam had reached a deadlock. At the beginning of November 2019,  U.S. Secretary of the Treasury Steven T. Mnuchin began facilitating negotiations between the three countries-- Ethiopia, Egypt and Sudan.

What is the Grand Ethiopian Renaissance Dam?

The Grand Ethiopian Renaissance Dam (GERD) is a gravity dam on the Blue Nile river in the Benishangul-Gumuz Region of Ethiopia and is under construction since 2011. It is around 15km east of the border with Sudan. Upon completion, the dam will be the largest hydroelectric power plant in Africa and will be the seventh-largest in the world.

The dam aims to generate electricity to relieve Ethiopia's acute energy shortage and for electricity export to neighbouring countries. The filling of reservoir with water began in July 2020 and may take 5 to 15 years to fill it fully, depending upon hydrologic conditions and agreements reached between the three nations-- Ethiopia, Sudan and Egypt.

Upon the completion of the project, an average annual energy generation of 15,759 Giga watt-hours per year energy will contribute to the National Grid of Ethiopia.

GERD: Components of the project

The GERD is being constructed for the purpose of generating electricity with a total installed capacity of average annual energy generation of 15,759 Giga watt-hours per year.

2- The reservoir area will cover 1,874 square kilometres at the full supply level of a maximum of 640 meters and a minimum of 590 metres above sea level.

GERD: Financing of the project

The financing of the project was entirely done by the Ethiopian Government to prevent relying on foreign countries that may withdraw their support under Egypt's pressure. As per reports, Chinese banks financed turbines and related electrical equipment of USD 1.8 billion.

Simegnew Bekele was the project manager of Grand Ethiopian Renaissance Dam from the start of its construction in the year 2011 till his death on 26 July 2018. The Grand Ethiopian Renaissance Dam is expected to consume around 10 million metric tonnes of concrete and the Ethiopian Government has pledged to use domestically produced concrete. In March 2012, the main contractor of the project, Webuild, awarded a contract to another Italian company 'Tratos Cavi SPA' to supply low and high-voltage cables for the dam. The French-based company, Alstom will provide the eight 375 MW Francis turbines for the project's first phase, at a cost of €250 million.

In April 2013, around 32% of the project was completed. By January 2016, around  4 million cubic meters of concrete was poured into the dam and the installation of the first two turbines was imminent.

On 21 July 2020, Ethiopian Prime Minister Abiy Ahmed announced the completion of the first filling of the Grand Ethiopian Renaissance Dam. The dam is currently under construction before it can be filled to a level for electricity generation.

Over several years, the point of contention has not changed-- the dam's location on the Blue Nile. The Blue Nile supplies around 80% of the water to the main Nile, along which both Egypt and Sudan lie. Both the countries (Egypt and Sudan) are concerned over the filling, operation and Ethiopia's potential control on the river's water.  On the other hand, Ethiopia insists that the dam will meet the need of its population and will not adversely impact the downstream water supplies.

It is to be noted that Blue Nile is a necessary water resource in the region and may impact water flow after the completion of the GERD project. Also, Egypt relies on the river Nile to meet 90% of its water requirements.

Explained: Ethiopia's Tigray crisis and its impact on the Horn of Africa

Is the GERD project finished?

By March 2020, 35% of the steelwork, 87% of the civil works, 17% of the electro-mechanical works was completed. On 21 July 2020, Ethiopian Prime Minister Abiy Ahmed announced the completion of the first filling of the Grand Ethiopian Renaissance Dam.

How GERD will benefit Ethiopia?

Which is the biggest dam in Africa?

What is the Grand Ethiopian Renaissance Dam (GERD) project?

The Grand Ethiopian Renaissance Dam (GERD) is a gravity dam on the Blue Nile river in the Benishangul-Gumuz Region of Ethiopia and is under construction since 2011.