Entire country wears a cheerful look when it is time for Holi festivity. Market places get abuzz with bustles as frenzied shoppers start making provisions for the festival.

" Holi is a time to reach out with the colors of joy. It is the time to love and forgive. It is the time expresses the happiness of being loved and to be loved through colors". - Anonymous

Holi is the colourful festival that brings feeling of love and closeness among people. It marks the commencement of spring season in India after the winter season. It is also known as Rang Panchami. It is celebrated with keenness and cheerfulness on the full moon day in the Phalgun month which is the month of March as per Gregorian calendar. Holi festival may be distinguished with an assortment of names & people of diverse states might be following dissimilar ethnicity. People spread colourful colours over each other. But, what makes Holi so exclusive and extraordinary is the spirit of it which remains the same all through the country & even across the globe, wherever it is celebrated.This article deals with the festival of Holi, how it is celebrated, its importance, history etc.

Entire country wears a cheerful look when it is time for Holi festivity. Market places get abuzz with bustles as frenzied shoppers start making provisions for the festival. Loads of diverse hues of abeer and gulal can be seen on the pavement days before the festival. Pichkaris in inventive and contemporary design too come up every year to entice the children who desire to collect them as Holi memorabilia and evidently, to wet everybody in the town. Womenfolk too start making early plannings for the holi festival as they cook loads of mathri, papri and gujiya for the family & also for the relatives. At some places, particularly in the North women also make papads & potato chips at this time.

Everybody gets enchanted at the onset of Holi as the season itself is so joyous. Holi is also called the Spring Festival - as it marks the influx of spring the season of hope & joy. The gloom of the winter goes as Holi assures of vivid summer days. Nature too, it seems exult at the arrival of Holi and wears its finest clothes. Fields get filled with crops gifting a good harvest to the farmers and flowers bloom colouring the surroundings and filling fragrance in the air. 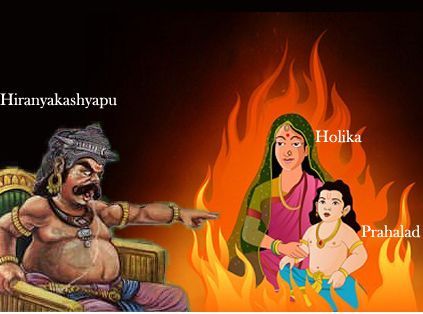 A Hindu festival, Holi has various legends associated with it. The foremost is the legend of demon King Hiranyakashyap who demanded everybody in his kingdom to worship him but his devout son, Prahlad became a follower of Lord Vishnu. Hiranyakashyap wanted his son to be slayed. He asked his sister Holika to enter a blazing fire with Prahlad in her lap as Holika had a boon which made him resistant to fire. Story goes that Prahlad was saved by lord himself for his extreme devotion and evil minded Holika was scorched to ashes, for her boon worked only when she penetrated the fire alone. Since that time, people light a flare, called Holika on Holi festival and rejoice the conquest of good over evil & also the conquest of fidelity to god. Children take extraordinary glee in the custom and this has another fable attached to it.

Some also commemorate the death of evil minded Pootana. The ogress tried to Lord Krishna as a toddler by feeding it poisonous milk while accomplishing the plan of Kansa, Krishna's devil uncle. On the other hand, Krishna sucked her blood & brought her end. Some who view the source of festivals from seasonal cycles consider that Pootana symbolizes winter & her death the termination & end of winter.

On the Holi eve, called Chhoti Holi, people congregate at significant crossroads and light massive bonfires; the ritual is called Holika Dahan. To deliver gratefulness to Agni, gram & stalks from the yield are also proffered to Agni with all modesty. Ash left from this bonfire is also regarded as sacred & people apply it on their foreheads. People consider that the ash protects them from iniquity forces.

Great exhilaration can be seen in people on the next day when it is essentially the time for the play of colors. Shops & offices stay closed for the day & people get all the time to get wild & whacky. Vivid colours of gulal & abeer fill the air & people take turns in bucketing colour water over each other.

Therefore, we can say that Holi is a colourful festival celebrated across the country with joyous. It is the arrival of spring season and to signify the victory of good over evil. It also bring everyone together as one. So, lets celebrate together Holi!

10 Unknown traditions of the Modern India