How much Tax do you pay on Diesel & Petrol in India?

There is a debate in every corner of the country that why the prices of diesel and petrol in India are higher as compared to neighbouring country.  In this article, we are trying to explain the whole mechanism of diesel and petrol price determination. Let's try to find out the answer to this question;

As we all know, India produces only 20% oil of its requirement and rest is imported from other countries. Saudi Arabia has traditionally been India's top oil importing source, but during the period of April-January 2017-18, Iraq has snatched this place. In this financial year, India has purchased 20% (38.9 million tons) of total crude oil requirement from Iraq while in the same period just 30.9 million tons imported from Saudi Arabia.

How National Highways are named in India

Let us calculate how the prices of diesel and petrol are calculated;

Let's assume that today the price of crude oil in the international market is $ 71 per barrel, if ocean freight of $ 1.5 per barrel is added to it, then total cost becomes $ 72.5 barrels.

How is the price of petrol and diesel determined?

So in the above table, you read that per liter cost of crude oil was only Rs.31 and when the oil is finally purchased by the consumers, its per litre cost became more than double. 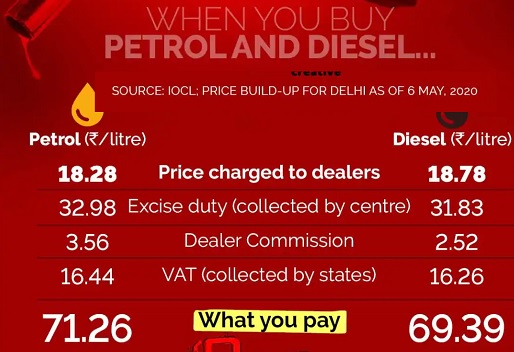 If the Central Government and the State Governments reduce their taxes by 50% then the prices of petrol and diesel in each state can be reduced up to Rs. 20 per litre. 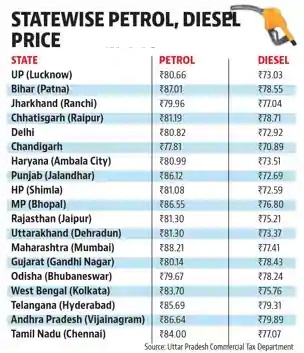 It is important to mention here that petrol been sold in India by adding 10% ethanol since December 2017. The cost of one litre of ethanol is around 41 rupees while it is sold at the rate of Rs.76.24 a litre to the consumers.

If a customer purchases 20 litre of petrol it means that he will get just 18 litre petrol and 2 litre ethanol while the customer is charged for 20 litres of petrol.

Worth to mention that tax on petrol was Rs 9.48 per litre and on diesel it was Rs3.56 a litre when the Modi government took office in 2014.

Note: it is worth mentioning that the price of crude oil and the exchange rate between the dollar and rupee also plays a crucial role in the price determination of diesel and petrol. But for the simplicity of the readers, we considered them constant.

It is expected that after reading this article, you must have understood that why there is an increase in the prices of diesel and petrol in the country and how much money you are paying as the tax to the central and states governments of the country.

Which benefits and rights you are entitled to at Petrol Pumps in India?