India's 1st vertical lift rail sea bridge will be coming soon. Why is it necessary to construct this bridge, where it is constructed or what is the location of the bridge, its importance, etc. 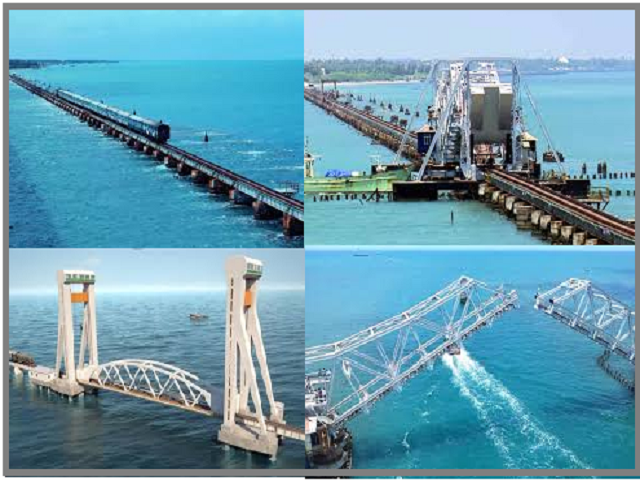 That is a new Pamban Bridge in Rameshwaram, Tamil Nadu will soon become a reality. According to Piyush Goyal, "the upcoming 2.07 km long New Pamban Bridge is going to be a boon for pilgrims and devotees who wish to start a spiritual tour to Rameswaram and Dhanushkodi, in the state of Tamil Nadu."

No doubt, the old Pamban bridge has played a significant role in joining Pamban Island with mainland India.

Pamban Bridge connects the town of Mandapam in mainland India with Pamban and Rameshwaram. In 1914, it started its operations. As we know that it was India's first sea bridge and was the longest sea bridge in India until the opening of the Bandra-Worli Sea Link in 2010.

This bridge was the only link between Rameshwaram and the mainland until 1988. As, 1988, the road bridge started.

Why is the new Pamban bridge constructed?

The old bridge is about 106 years old and requires frequent maintenance. It has a limited capacity for train operations.

With the help of the new bridge, Indian Railways will be able to operate trains on the route at a higher speed. It will also allow trains to hold more weight.

Also, between the mainland and Rameshwaram, it will maximize the volume of traffic. The area has religious significance. It is quite interesting that the bridge will have India's first vertical launch rail section.

It is expected to promote tourism in this region, mainly for pilgrimage purposes as a large number of devotees come to visit Rameshwaram Temple and Jyotirling every year.

The Indian Prime Minister Narendra Modi laid the foundation of this bridge in Kanyakumari in March 2019.

The bridge will be constructed with the help of modern techniques. The beauty of this bridge is that its middle part gets lifted up to let ships pass through during travel. This technology is known as 'Scherzer' rolling lift technology.

That is the new vertical lift bridge will have 'Scherzer' rolling lift technology.

It will be over 2 kilometres long with 100 spans of 18.3 metres, one navigational span of 63 metres that will move vertically upwards, allowing ships/steamers movement.

The new Pamban Bridge will be equipped with electro-mechanical controlled systems.

It will be interlocked with the train control systems in order to provide seamless system connectivity.

It will be Indian Railway's first vertical-lift rail sea-bridge.

The old bridge soon would be replaced by the New Pamban Bridge which is being constructed at a cost of more than Rs 240 crores.

What is the Time Use Survey (TUS) and what are its key findings?