Instituted in the year 1954, Bharat Ratna is the highest civilian award of India. It is awarded in recognition of exceptional service towards any field of human endeavour, without distinction of race, occupation, position or sex. 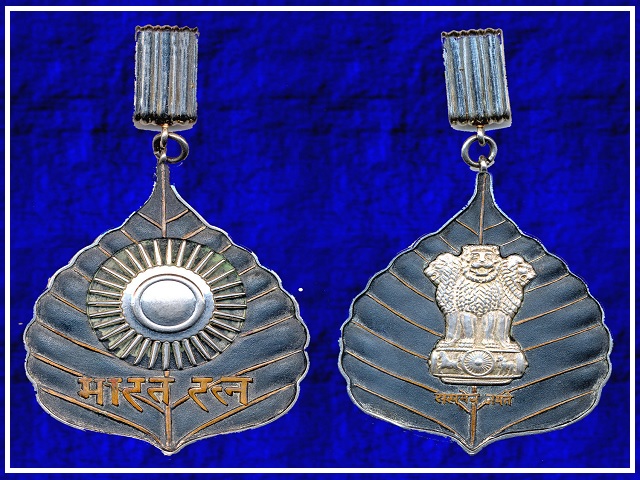 Instituted in the year 1954, Bharat Ratna is the highest civilian award of India. It is awarded in recognition of exceptional service towards any field of human endeavour, without distinction of race, occupation, position or sex.

A maximum of three Bharat Ratna awards can be given each year upon the recommendations made by the Prime Minister to the President of India. On conferment of the award, the recipient receives a Sanad (certificate) signed by the President and a medallion. No monetary grant is associated with the award.

As mentioned in Article 18(1) of the Indian Constitution, the recipients cannot use Bharat Ratna as a prefix or suffix to their names. However, a recipient can use the below-mentioned expression in their biodata, letterhead, visiting card, etc.

The aforementioned design was altered after a year. At present, the award is in the shape of a peepal leaf rimmed in platinum. It is approximately 59 mm long, 48 mm wide and 3.2 mm thick. On the obverse side, the embossed sunburst design, made of platinum, has a diameter of 16 mm with rays spreading out from the centre of the Sun. The words "Bharat Ratna" on the obverse side and "Satyameva Jayate" on the reverse side in Devanagari script, and the National Emblem on the reverse side remained the same. A 2-inch-wide white ribbon is attached to the medal so it can be worn around the neck.

The Bharat Ratna medals are produced at Kolkata's Alipore Mint, along with the other prestigious awards such as Padma Vibushan, Padma Bhushan, Padma Shri, and Param Veer Chakra.

1. The award was started by the former President of India Rajendra Prasad on 2nd January 1954.

2. Initially, the award was not conferred posthumously. This criterion was changed in 1966.

3. Dr. Sarvapalli Radhakrishnan, Dr. C.V. Raman, and Chakravarti Rajagopalachari were the first recipients of the Bharat Ratna Award in 1954.

4. Sachin Tendulkar became the first sportsperson and the youngest Bharat Ratna recipient in 2014.

5. In 1992, the government's decision to confer Bharat Ratna posthumously on Subhas Chandra Bose met with criticism due to controversy over his death. Following a 1997 Supreme Court decision, the award was cancelled. This was the first and to date the only occasion when the award was announced but withdrawn.

6. The year 1999 happens to be the only year when the award was conferred to four people.