Inter-State Water Sharing Disputes in India arise over the use, distribution, and control of waters of inter-state river basins. This article sheds light on water sharing issues, constitutional provisions and water laws to adjudicate such disputes. 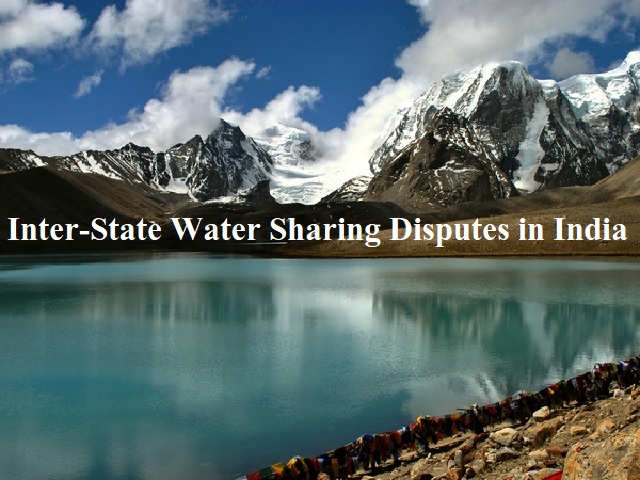 2- Entry 56 of Union List: It empowers the Central Government for the regulation and development of inter-state rivers and river valleys to the extent declared by Parliament to be expedient in the public interest.

Article 262 of the Indian Constitution

In case of disputes related to waters, Parliament may by law provide:

1- For the adjudication of any dispute or complaint concerning the use, distribution or control of the waters of, or in, any inter-State river or river valley.

2- That neither the Supreme Court nor any other court shall exercise jurisdiction in respect of any such dispute or complaint as mentioned above.

Parliament enacted the below-mentioned Acts according to Article 262 of the Indian Constitution:

1- River Board Act, 1956: The Act empowered the Central Government to establish boards for Interstate Rivers and river valleys in consultation with State Governments. However, no board has been created to date.

2- Inter-State Water Dispute Act, 1956: If State Government(s) approach the Central Government for the constitution of the Tribunal, the Centre may form a Tribunal after trying to resolve the dispute through consultations. It is to be noted that Supreme Court shall not question the Award or formula given by the Tribunal but it can question the working of the Tribunal.

Present Status: Report and Decision given in July 1980

Present Status: Report and Decision given in May 1976

Present Status: Report and Decision given in December 1979. Narmada Control Authority (NCA) was constituted to give effect to the decision.

Present Status: Report and Decision given in April 1987. Further Report is pending.

Present Status: Report and Decision given in February 2007 which was slightly modified by the Supreme Court. Cauvery Water Management Authority (CWMA) and Cauvery Water Regulation Committee (CWRC) were constituted to give effect to the decision of CWDT as modified by SC.

Present Status: Report and Decision given in December 2010. SLPs filed pending in the Court. The term of the Tribunal has been extended after the bifurcation of the united Andhra Pradesh State. The matter is therefore under adjudication in the Tribunal.

Present Status: Under Adjudication by the Tribunal. Report and Decision are awaited.

Inter-State River Water Disputes Act of 1956 governs the adjudication of water disputes in India. It was amended in 2002 to include recommendations of the Sarkaria Commission. The amendments are as follows:

1- The Tribunal has to be constituted within a year of getting the request.

3- The Tribunal award is not immediately implemented and the concerned parties may seek clarification within 3 months of the award.

1- Prolonged proceedings and delays in dispute adjudication. For instance, Cauvery Water Disputes Tribunal. The Tribunal which was constituted in 1990 gave its award in 2007.

2- Although the award given by the Tribunals is final and beyond the jurisdiction of the Courts, the States or individuals can approach the Supreme Court under Article 136 (Special Leave Petition) and Article 32 by linking the dispute with the violation of Article 21 of the Indian Constitution which guarantees Right to Life.

3- The composition of the Tribunal is not multidisciplinary as it consists of persons only from the judiciary. Thus, there is not much difference between the Tribunal and Supreme Court Bench.

4- Due to the lack of availability of authoritative water data, it is difficult to even set up a baseline for adjudication.

5- The shift in Tribunals' approach aids extended litigation and politicisation of water-sharing disputes.

6- With the growing nexus between water and politics, the disputes have been transferred into turfs of vote bank politics. It has led to increasing defiance by states, extended litigations and subversion of resolution mechanisms. For instance, Ravi-Beas Tribunal.

7- Due to India's complicated federal polity, colonial legacy, and procedural complexities involving multiple stakeholders across governments and agencies, there is too much discretion at too many stages of the process.

To solve the aforementioned issues and speed up the interstate water dispute resolution, the Inter-State River Water Disputes Amendment Bill, 2019 was introduced by the Centre.

On 25th July 2019, the Inter-State River Water Disputes Amendment Bill was introduced by the Minister of Jal Shakti Gajendra Singh Shekhawat. The Bill provides for the adjudication of disputes relating to waters of inter-state rivers and river valleys.

1- Disputes Resolution Committee (DRC): When a state puts in a request regarding any water dispute, the Central Government will set up a Disputes Resolution Committee (DRC) to resolve it. The DRC will comprise of a Chairperson, and experts with at least 15 years of experience in relevant sectors, to be nominated by the central government. It will also comprise one member from each state (at Joint Secretary level), who are party to the dispute, to be nominated by the concerned state government.

The DRC will seek to resolve the dispute through negotiations, within one year (extendable by six months), and submit its report to the Central Government. If DRC is unable to solve a dispute, the Central Government will refer it to the Inter-State River Water Disputes Tribunal.  Such referral must be made within three months from the receipt of the report from the DRC.

3- Composition of the Tribunal: The Tribunal will consist of a Chairperson, Vice-Chairperson, three judicial members, and three expert members, to be appointed by the Central Government on the recommendation of a Selection Committee.  Each Tribunal Bench will consist of a Chairperson or Vice-Chairperson, a judicial member, and an expert member.  The Central Government may also appoint two experts serving in the Central Water Engineering Service as assessors to advise the Bench in its proceedings.  The assessor should not be from the state which is a party to the dispute.

4- Time frames: The proposed Tribunal must give its decision on the dispute within two years, which may be extended by another year. Under the Act, if the matter is again referred to the Tribunal by a state for further consideration, the Tribunal must submit its report to the Central Government within a period of one year. This period can be extended by the Central Government. The Bill amends this to specify that such extension may be up to a maximum of six months.

It is to be noted that India has only 4% of the renewable water resource and 18% of the world's population. There is uneven water distribution in India and states are frequently at loggerheads over the distribution of rivers in the country. Therefore, efforts are always made to resolve the dispute through mutual discussions and negotiations between the party States.

Water crisis in India amidst the COVID-19 lockdown: All you need to know