Vande Bharat Express or Train 18 is fully manufactured in India and is India’s first semi-high-speed train. It is running from New Delhi to Varanasi and will cover the journey in 8 hours. Now on 3 October, 2019 this train is being flagged off from Delhi to Katra by the Home Minister Amit Shah.

Vande Bharat Express is also known as Train 18 which is an indigenously designed train. No doubt it is a unique train that will mark a new era in travel technology for Indian Railways.

Let us tell you that it is a semi-high speed train which will be operational from mid of February 2019 from Delhi to Varanasi. The expected duration of the journey is around 8 hours. During the course of journey it has only two stops one in Kanpur and another at Prayagraj.

It is said that the cost of this semi-high speed train is about Rs. 100 crores and is faster than the Shatabdi Express. Let us study some interesting facts about Vande Bharat Express train through this article.

1. Engine of the train: Train 18 or Vande Bharat express is the India's first engineless train. Till date, trains of India have a separate engine coach while train 18 has integrated engine like bullet or metro train.

Do you know that Indian Railways introduced a self-propelled train for inter-city travel? Due to this the journey time will be reduced as this new technology will allow faster acceleration and deceleration. It is said that the Vande Bharat Express will cover the journey in 8 hours from New Delhi to Varanasi which will make it faster than the existing Shatabdi Express which takes 12-13 hours.

2. Fully automatic doors and AC coaches: The train has 16 fully air conditioned chair cars coaches with two seating options - Economy and Executive class. Amazing feature is that the Executive class have revolving chair which can turn 180 degrees. Also one of the most important facilities provided in the Vande Bharat Express is the automatic doors with sliding footsteps which are centralised control like Metro trains.

What does yellow and white line indicates in the train coaches? 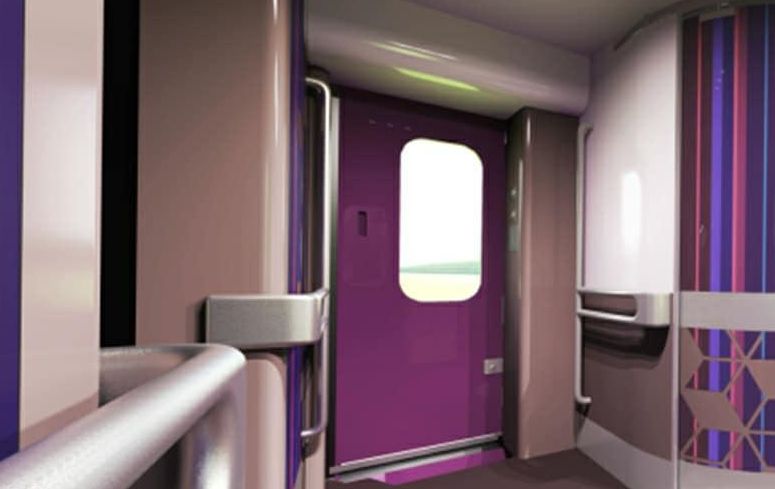 Source: www.team-bhp.com
6. Speed of the train: It is capable of running at the speed over 180 Km per hour faster than the Shatabdi Express but the current tracks are supportive of speeds not more than 130kmph.

7. Bio-Vacuum toilets: To solve the problem of the sanitation in the train that usually people faces bio-vacuum toilets are used for both Indian and Western style washrooms. It will provide zero discharge as we see in the aeroplanes. Also, touch -free bathroom fittings are provided to allow users to experience sanitation without worry. 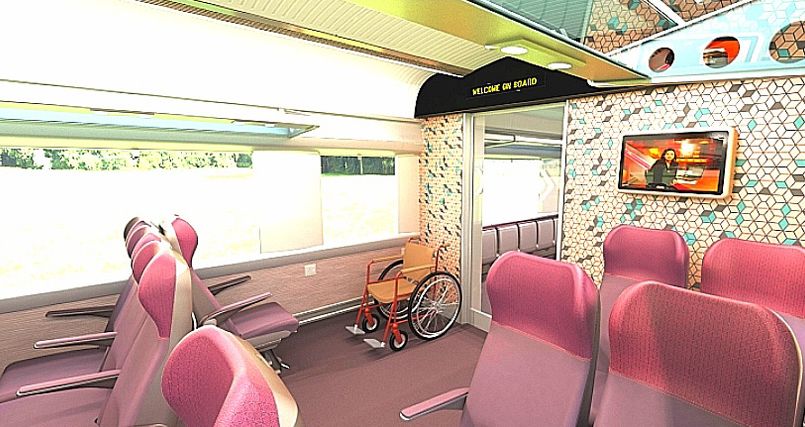 Features of Smart Coach in the Indian Railways
9. Friendly spaces for the disabled is provided in the train: Some coaches of the Vande Bharat express train will have spaces to park wheelchairs so, that disabled will not face any kind of difficulty and make it as disabled-friendly.

10. Train cost is half the cost of import: According to ICF, the manufacturing cost of the train 18 is approximately half the cost of a similar imported train set and is made under 'Make in India'. The average per coach cost would be around Rs 6 crore. Also, it is said that when mass production of the trail will be started the cost will come closer to Rs 5 crore per coach.

Some other features are:

- The train is designed in such a way that passengers can see the glimpse of driver's cabin.

- There are modular racks in each coach for the luggage and are more spacious than other trains like Gatiman Express.

- Pantry of the train consists of equipments of better quality for heating and chilling food and beverages. Food gets heated uniformly.

- There are sockets which are available for each in the coaches to charge mobile or laptop easily. These sockets are fitted under the seat in a convenient position.

- Even, the gaps among the coaches are fully sealed. This helps to reduce the external noise.

- In the coaches of the train reading lights with touch control is given.

- Computerised aerodynamic driver's cabin is there.

- It is fully made in India in the Integral Coach Factory, Chennai etc.

So, we can say that Vande Bharat Express train is fully Indian manufactured new technology driven train with maximum facilities which give the feeling of world class.