The Peninsula is a large mass of land projecting into a body of water. The Indian Peninsular Plateau is a part of the ancient Gondwanaland and is in a triangular shape. In this article, we have provided a list of Mountain passes in Peninsular India which will be helpful for the aspirants of competitive exams like UPSC/PCS/SSC/CDS, etc. 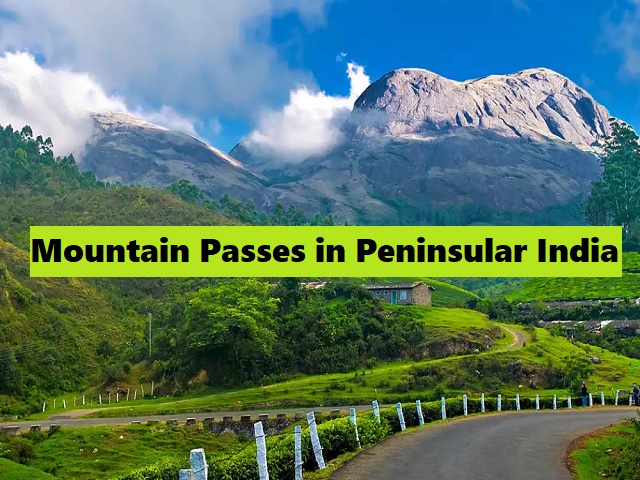 The Peninsula is a large mass of land projecting into a body of water. The Indian Peninsular Plateau is a part of the ancient Gondwanaland and is in a triangular shape. Its average height is between 600 to 900 m. It consists of the Eastern Ghats of Coromandel, the Western Ghats covering the west coast of India, Aravalli in the northwest between Gujarat and Rajasthan, Vindhya and Satpura ranges in central India. In the Himalayas, we find examples of horizontal movements, but in the peninsular plateau, we find examples of vertical movements.

It was the ancient trade route developed by the Satavahana Dynasty to connect the ports (Choul, Revdanda, Panvel) on the Konkan coast and the surrounding areas of the Deccan plateau. This ghat comes under the proposed Golden Quadrilateral Freight Corridors.

Location: situated on the crest of the Western Ghats

Between/Separating: Lies between Palasdari and Khandala for railway and between Khopoli and Khandala on the road route in Maharashtra.

It connects the city of Udaipur with Sirohi and Jalore in Rajasthan. It is about 1200 metres above sea level.

It is also called Palakkad Gap. It is an important mountain pass in the Western Ghats mountain range, in southwestern India that runs along the entire eastern edge of Kerala isolating it from the neighboring Tamil Nadu.

Location: between Coimbatore in Tamil Nadu and Palakkad in Kerala

Why do the Western Ghats receive more rain than the Eastern Ghats?

It also called as Thul Ghat or Kasara Ghat. It is a series of mountain slopes in the Western Ghats traversed by the Bhusawal-Kalyan line.

Location:  The Kasara Ghat is located on the busy Mumbai–Nashik route, and is one of the four major routes, rail and road routes, leading into Mumbai. The railway line, which passes through the ghat is the steepest in India with a gradient of 1 in 37.

It was built by the King Asa Ahir of Ahir Dynasty to connect north India with Deccan Plateau. Hence, it is popularly known as Dakkani Darwaza or Doorway to the Deccan.

Between/Separating: It is about 20 km north of the city of Burhanpur, in Burhanpur District of Madhya Pradesh state.

It is historically very significant because the famous Battle of Haldighati took place in 1576 between the Kingdom of Mewar (army led by Maharana Pratap) and Mughal emperor Akbar's general Man Singh I of Amer. This region is famous for its charity rose products and the mud art of Molela.

Between/Separating: It connects Rajsamand and Pali districts of Rajasthan.

List of Important Glaciers of the Himalayas Mountain Range

It has picturesque mountain-scapes and a pleasant climate. This region is famous for paragliding sport.

Between/Separating: It connects the Ratnagiri district to Kolhapur

This region is famous for the rare species of wolf snake (Lycodon striatus).

Location: Sahyadri mountain range of Western Ghats (On the intersection of the borders of Goa, Karnataka and Maharashtra)

This region is famous for wide varieties of birds such as quails, rails, crakes, flamingos, and cuckoos.

It is also called as Nanaghat or Nana Ghat. It was a part of an ancient trading route. There are various caves in this region and major cave with Hindu Sanskrit inscriptions in Brahmi script. The name nane means "coin" and ghat means "pass". The name is given because this path was used as a tollbooth to collect tolls from traders crossing the hills.

This region is famous for sprawling green Ghats, misty roads, and cascading waterfalls.

Between/Separating: It connects the talukas of Mulshi and Tamhini in the Pune district.

This region is for wildlife, dense hilly forests, Hiranyakeshi temple, and a number of waterfalls.

Between/Separating: It connects Sawantwadi of Maharashtra to Belgaum of Karnataka.

It connects the coastal Ratnagiri District in Konkan region of Maharashtra with the Satara District in Desh region.

Between/Separating: It connects the coastal Ratnagiri district in the Konkan region of Maharashtra with the Satara District in the Desh region.

Which pass is located on the intersection of the borders of Goa, Karnataka, and Maharashtra?

Which pass is famous for the rare species of wolf snake?

Which ghat is also known as the Dakkani Darwaza?

Goran Ghat is situated in which state of India?