The owner of the MDH masala brand, 'Mahashay' Dharampal Gulati passed away in the wee hours on 3 December 2020 at the age of 97. 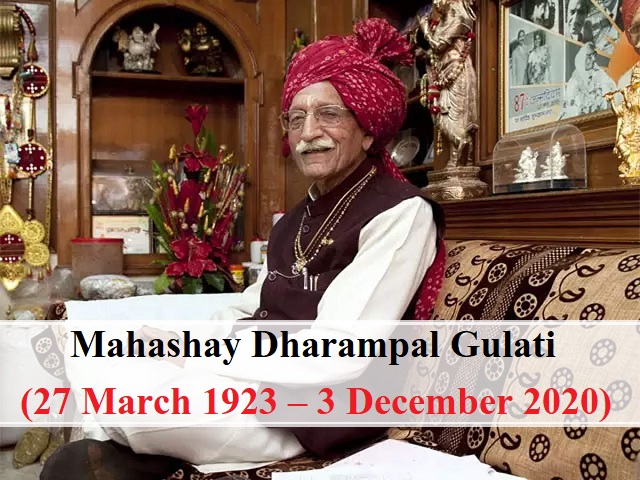 The owner of the MDH (Mahshian Di Hatti Private Limited) masala brand, 'Mahashay' Dharampal Gulati passed away in the wee hours on 3 December 2020 at the age of 97. He was fondly called 'Masala King'.

Dharmpal Gulati was born on 27 March 1923 in Sialkot, present-day Pakistan. He is a fifth-grade school dropout.

In 1937, he set up a business with the help of his father which failed miserably. Shortly afterwards, he joined his father's spice shop. At that time, his family was popularly known as 'Degi Mirch Wale' people.

During the partition in 1947, his family migrated to India and spent initial years in a refugee camp in Amritsar before moving to Delhi.

In 1919, his father Mahashay Chunni Lal Gulati opened a small spice shop in Pakistan by the name 'Mahshian Di Hatti'. When the family moved to India after Partition, Dharmpal Gulati opened a spice shop in Karol Bagh, Delhi and rented a second shop in Delhi's Chandni Chowk. In 1959, he purchased land in Kirti Nagar, New Delhi to reestablish the manufacturing unit of MDH.

In 2017, Dharmpal Gulati became the highest-paid fast-moving consumer goods CEO in India. He took home more than Rs. 21 crores as salary in the last FY. He held 80% stake in MDH.

Dharmpal Gulati once said that his motivation to work is being sincere in product quality sold at affordable prices.

Dharmpal Gulati donates around 90% of his salary to charity under the banner of  Mahashay Chunni Lal Charitable Trust. The Trust operates a 250-bed hospital in Delhi, along with a mobile hospital for slum dwellers and four schools.

Dharmpal Gulati was undergoing treatment at Mata Chanan Devi Hospital, Delhi for the last three weeks and died of a cardiac stroke at 5:21 a.m. on 3 December 2020.