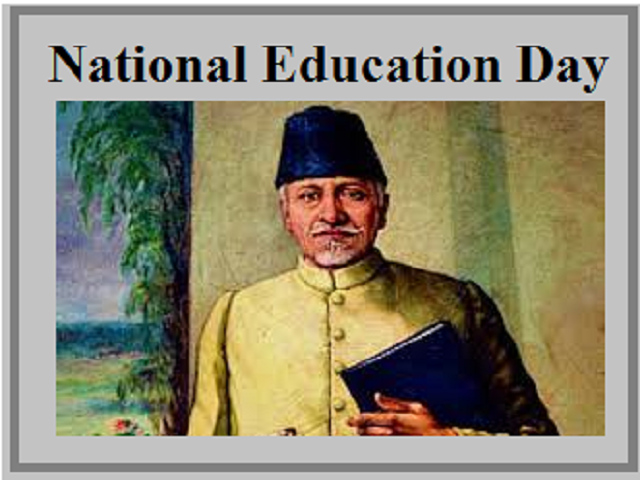 Dr. K. Kasturirangan, Former Chairman, ISRO, and Chairman of the committee for drafting the New Education Policy was the Guest of Honour for the occasion.

Maulana Abul Kalam Azad’s contributions in the field of education, nation-building, and institution-building are exemplary. He is the key architect of education in India. He was India's first Vice President and also the first education minister of independent India from 1947 to 1958.

On 11 September 2008, the Ministry of Human Resource Development (HRD) announced to commemorate the birthday of the great person by recalling the contribution of Maulana Abul Kalam Azad in the field of education by celebrating 11 November as National Education Day. Since 2008, every year in India, National Education Day is celebrated without declaring it a holiday.

His original name was Abul Kalam Ghulam Muhiyuddin and also known as Maulana Abul Kalam Azad or Maulana Azad. He was born on 11 November, 1888 in Mecca now in Saudi Arabia, and died on 22 February, 1958 in New Delhi.

Cause of Death: Stroke

He was a freedom fighter, journalist, and reformer and committed to building a nation through education. He was a leader of the Indian National Congress and elected as President of Congress in 1923 and 1940. He was awarded Bharat Ratna posthumously, India's highest civilian honour in 1992.

In 1912, he started the publication weekly namely "Al-Hilal" to attack the policies of the British Government and also focus on the problems faced by Indians at that time.

After gaining independence, he was appointed as India's first Minister of Education and he was also inducted in the Constituent Assembly to draft India's Constitution. In his tenure, various measures were taken to improve and to promote primary and secondary education. He also focused on scientific education, established several universities and promote the avenues of research and higher studies. He worked for free education in India and wrote several poems in Urdu.

His father was a Bengali Muslim of Afghan origin and a scholar. His mother was the daughter of a rich Arabian Sheikh. When he was young, his family moved back to India in Calcutta and there he received a traditional education at home from his father and other Islamic scholars. He was influenced by the Indian educator Sir Sayyid Ahmad Khan and he learned English without his father's knowledge. He learned Arabic, Persian, Urdu, philosophy, mathematics, geometry and algebra. When he was 11 years old his mother passed away. At the age of 13, he was married to young Zuleikha Begum.

- On 28 December, 1953, he established the University Grants Commission (UGC).

- He had established IISc and School of Architecture and Planning.

- In 1953, he established Sangeet Natak Academy.

- In 1954, he founded Sahitya Akademy and Lalit Kala Akademy.

- In 1951, he established the Indian Institute of Technology.

- He also played a crucial role in the development of the Indian Institute of Science, Bangalore and the Faculty of the Delhi University.

National Education Day is observed to commemorate the birthday of the first education minister of independent India and is observed in the whole country.

Important Days and Events in November 2020