What is Official Secrets Act?

Recently, it was in the news that the Delhi Police has arrested a strategic affairs analyst and two others i.e. a 30-year-old Chinese woman and her Nepalese accomplice under the Official Secrets Act (OSA). Do you know what is an Official Secrets Act an anti-spying law? 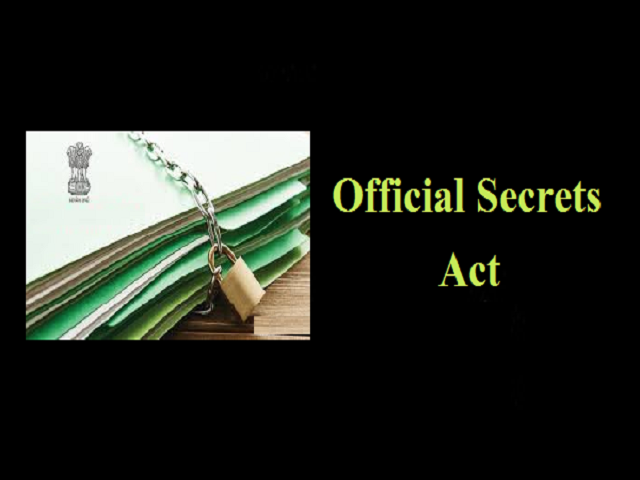 A strategic affairs analyst and two others – a 30- year-old Chinese woman and her “Nepalese accomplice” recently has been arrested by the Delhi Police under Official Secrets Act (OSA).

As per the police, Rajeev Sharma, the analyst, had passed on information like the deployment of Indian troops on the border to Chinese intelligence officers. The other two have been arrested for allegedly "supplying Rajeev Sharma huge amounts of money routed through hawala channels for providing the sensitive information to Chinese intelligence ".

What is the Official Secrets Act (OSA)? History

It has its roots in the British colonial era that is the Indian Official Secrets Act (Act XIV), 1889. The main objective to brought gag the voice of a large number of newspapers that had come up with various languages and were opposing the British Raj policies, building political consciousness and facing police crackdowns and prison terms.

During Lord Curzon's tenure as Viceroy of India, the act was amended and made stringent in the form of the Indian Official Secret Act, 1904.

A newer version of the act was notified in 1923.

The Indian Official Secrets Act (Act No XIX of 1923) was extended.

It was extended to all matters of secrecy and confidentiality in governance in the country.

After India gained independence, it was further amended in 1951 and 1967.

What is Uniform Civil Code?

In its present form, the Act deals with two aspects:

1.  Spying or espionage. It is covered under Section 3 which deals with the secret information and it can be any official code, password, sketch, plan, model, article, note, document, or information.

One thing here is to note that Section 3 only tells the form of a secret but does not tell what is considered as secret.

It is the government's discretion to decide what comes under the ambit of a "secret" document to be charged under Official Secrets Act.

It is the government's discretion to decide what comes under the ambit of a "secret" document to be charged under Official Secrets Act,

The Act has been argued that the law is in direct conflict with the Right to Information Act, 2005.

Let us have a look at RTI and OSA

RTI Act Section 22 provides for its primacy that is provisions of other laws including OSA. This provides an overriding effect to the RTI Act, notwithstanding anything inconsistent with the provisions of OSA.

The voices that are against the act are as follows:

1. The Law commission in 1971 became the first official body to make an observation regarding OSA. It observed that “just because a circular is marked secret or confidential, it should not attract the provisions of the Act’’. But the law commission did not recommend any change to the Act.

2. The 2nd Administrative Reforms Commission (ARC) OSA can be repealed as per the recommendation of the Act and also can be replaced with a chapter in the National Security Act which contains the provisions relating to official secrets. It was observed that OSA was "incongruous with the regime of transparency in a democratic society”.

3. A committee was formed in 2015 to look into the provisions of the OSA in light of the RTI. On 16 June, 2017, it submitted its report to the Cabinet Secretariat and recommended that OSA can be made more transparent and in line with the RTI Act.

Some of the cases when OSA was invoked are:

1. ISRO Spy case targeting scientist S Nambi Narayan: Under OSA, before his acquittal, he had faced a criminal trial and was accused of passing on rocket and cryogenic technology to Pakistan for illegal gratification.

2. Former Diplomat Madhuri Gupta: In 2018, the most recent conviction that came under OSA, when a Delhi court sentenced the former diplomat Madhuri Gupta, who had served at the Indian High Commission in Islamabad to three years in Jail for passing on sensitive information to the ISI.

3. Kashmir Times journalist Iftikhar Gilani: He was arrested in 2002 and charged under OSA.