Oscar Fernandes passed away: Congress veteran and former Union Minister Oscar Fernandes breathed his last on 13 September 2021 at Yenepoya Hospital in Mangaluru. Let us have a look at his life through this article. 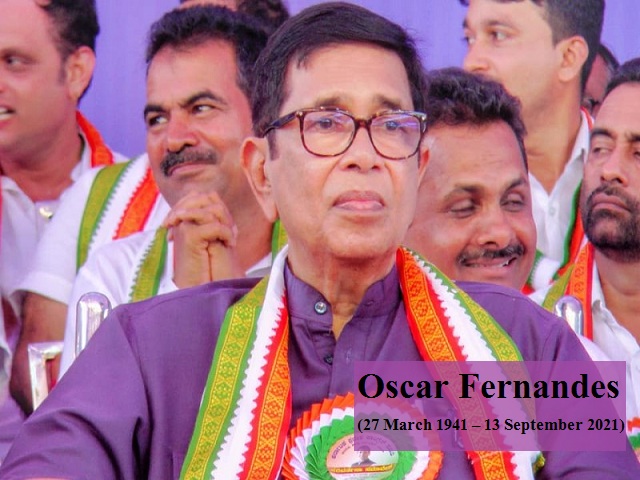 Oscar Fernandes no more: Congress veteran and former Union Minister Oscar Fernandes breathed his last on 13 September 2021 at the age of 80. He is survived by his wife, son and daughter.

He sustained a head injury in July this year after an accidental fall while doing yoga at his home. Fernandes was admitted to Yenepoya Hospital in Mangaluru on 19 July 2021 after he complained about frequent headaches. A clot was detected in his brain after he underwent a medical examination.

At this sad unfortunate moment, politicians, friends and family took to Twitter with condolence posts. Let us have a look at some of them below:

Saddened by the demise of Rajya Sabha MP Shri Oscar Fernandes Ji. In this sad hour, my thoughts and prayers are with his family and well-wishers. May his soul rest in peace: PM @narendramodi

We are deeply saddened by the demise of Shri Oscar Fernandes ji, our heartfelt condolences to his family.

A Congress stalwart, his vision for an inclusive India had a huge influence on the politics of our times.

The Congress family will deeply miss his mentorship & guidance. pic.twitter.com/UXcLI765yP

My heartfelt condolences to the family and friends of Shri Oscar Fernandes Ji.
It is a personal loss for me. He was a guide and mentor to many of us in the Congress Party.

He will be missed and fondly remembered for his contributions. pic.twitter.com/NZVD592GSJ

Let us have a look at his life and political career.

Oscar Fernandes was born on 27 March 1941 in Udupi, South Canara, Madras Presidency, British India (present-day Karnataka, India) to Roque Fernandes and Leonissa M. Fernandes. His father was the head of Government Composite PU College and the first President of Manipal Institute of Technology, while his mother was the first female magistrate in India, at the family estate at Udupi.

On 26 August 1981, he married Blossom Mathias Prabhu and the couple gave birth to Oshan (son) and Oshanie (daughter).

Oscar Fernandes served as the Union Cabinet Minister and held several portfolios such as Statistics and Programme Implementation, NRI Affairs, Youth and Sports Affairs and Labour and Employment from 2004 to 2009 under the UPA government led by Dr. Manmohan Singh.

He also served as the Chairman of Central Election Authority of the All India Congress Committee, AICC General Secretary, the Minister of State (Independent charge) and Parliamentary Secretary to Rajiv Gandhi.

Sidharth Shukla died at 40: A look at the life and career of Balika Vadhu and Bigg Boss 13 fame actor