Vice President M Venkaiah Naidu tweeted and said, "I pay my humble tribute to the great leader and profound thinker Pandit Deendayal Upadhyaya on his birth anniversary today. His philosophy of Integral Humanism and Antyodaya has been a source of inspiration for all and will continue to guide the nation in the times to come."

Home Minister Amit Shah paid tribute and said in a tweet that his life is an example of social harmony and patriotism. "The master of Indian politics, rich in versatility and founder of Jana Sangh Pandit Deendayal Upadhyaya Ji struggled throughout his life for the protection and conservation of India's culture and values. With ideas of integral Humanism and Antyodaya, he gave a progressive ideology to the nation." 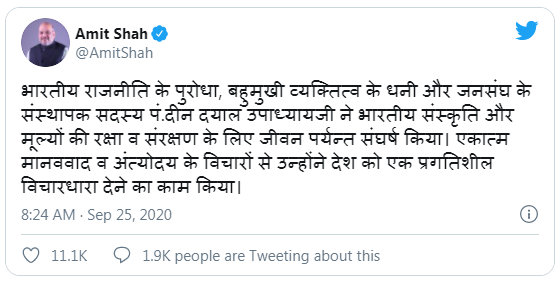 1. On 25 September, 1916, he was born in the village Chandrabhan, now known as Deendayal Dham, near the Farah town in Mathura District. His father's name was Bhagwati Prasad and he was an astrologer. The mother's name was Rampyari. When he was eight years old, his both parents died and he was brought up by his maternal uncle.

2. Under the guardianship of his maternal uncle and aunt he did his education and went to high school in Rajasthan where he completed matriculation. He did his intermediate from Birla College in Pilani, B. A from Sanatan Dharma College, Kanpur in 1939. To pursue a master's degree in English literature he joined St.John's College, Agra but not able to complete it. He joined Rashtriya Swayamsewak Sangh (RSS) as it's full-time worker known as Pracharak.

3. From 1942, he started full-time work in the RSS and became a lifelong Pracharak. There, he met the founder of the party, KB Hedgewar, and underwent a 40-day camp in Sangh Education and a second-year training in the RSS Education Wing.

4. In the 1940s he started the monthly Rashtriya Dharma from Lucknow for spreading the ideology of Hindutva nationalism. Later, he also started Panchjanya and daily Swadesh.

5. He became the first General Secretary of the Uttar Pradesh branch of the Bharatiya Jan Sangh when it was founded in 1951. Thereafter, he was appointed its All-India General Secretary. For 15 years, he remained the outfit’s general secretary.
6. Apart from all his organisational capabilities he was also known for his philosophical and literary works. He developed the concept of 'Integral Humanism' which advocated the holistic development of the mind, body, intellect, and soul, of every individual.

7. He was convinced that as an independent nation, India could not rely upon Western concepts including individualism, democracy, socialism, communism, or capitalism.

8. He always focuses that the Indian intellect was getting suffocated by Western theories. He welcomed modern technology but as per the Indian requirements. He always believed in Swaraj that is self-governance.

9. He was elected the president of the Jana Sangh in December 1967. On 11 February, 1968, he was murdered under mysterious circumstances while travelling. His body was found near Mughalsarai railway station in Uttar Pradesh.

10. Some of his literary works include the play "Chandragupta Maurya" and a translation of a biography of Dr. K.B. Hedgewar, which was originally written in Marathi. He also composed a biography of Adi Shankara (Shankaracharya), the 9th-century Hindu reformer.

"Here in Bharat, we have placed before ourselves the ideal of the fourfold responsibilities of catering to the needs of Body, Mind, Intellect, and Soul with a view to achieve the integrated progress of Man."

No doubt, he dedicated his life to social causes and the Bharatiya Jana Sangh Party. He never married but several young party workers looked him as an inspirational father-figure during his lifetime.