Procedure to suspend an MP from the House: All you need to know

As we know that Rajya Sabha's 8 MPs were suspended on 21 September, 2020 for unruly behaviour within the House. What is the reason for suspending an MP, rules under which the Preceding Officer acts, what is the procedure in Rajya Sabha, is there any alternative to suspension, etc. Let us study in detail. 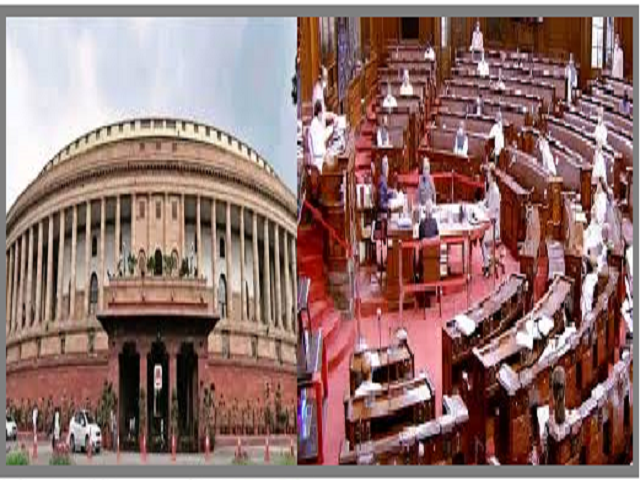 Procedure to suspend an MP from the House

On 21 September, 8 MPs from Rajya Sabha were suspended for unruly behaviour in the House. By a voice vote, the motion was passed.

The Chairman of Rajya Sabha is empowered under Rule Number 255 to "direct any Member whose conduct is in his opinion grossly disorderly to withdraw immediately" from the House.

After the adoption of the motion, Chairman M Venkaiah Naidu asked the MPs to leave the House. The members who were suspended refused to leave and sat on a dharna outside the Parliament.

The reason behind the Suspension of an MP

- As per the general principle it is the role and duty of the Presiding Officer Speaker of Lok Sabha and Chairman of Rajya Sabha to maintain order so that the function of the House runs smoothly. The eight members' suspension came after a day when the Upper House witnessed a massive unruly scene by protesting Opposition members during the passage of two farm bills.

- The Speaker or Chairman is empowered to force a Member to withdraw from the House in order to ensure that the proceedings are conducted in the proper manner.

Power and Functions of Indian Parliament

Rules under which the Presiding Officer Acts

According to the Rule Number 372 of the Rules of Procedure and Conduct of Business “The Speaker, if is of the opinion that the conduct of any Member is grossly disorderly, may direct such Member to withdraw immediately from the House, and any Member so ordered to withdraw shall do so forthwith and shall remain absent during the rest of the day’s sitting.”
To deal with more obstinate or recalcitrant Members, the Speaker makes take recourse to Rules 374 and 374A.
What is Rule 374?
- "The Speaker may name a Member if deems it necessary, who disregards the authority of the Chair or abuses the rules of the House by persistently and wilfully obstructing the business thereof."

-  "If a Member is so named by the Speaker, the Speaker shall, on a motion being made forthwith put the question that the Member (naming such Member) be suspended from the service of the House for a period not exceeding the remainder of the session."

- "Provided that the House may, at any time, on a motion being made, resolve that such suspension be terminated."

On 5 December, 2001, the Rule 374A was incorporated within the Rule Book. The purpose was to skirt around the necessity of moving and adopting a motion for suspension.

- "Notwithstanding anything contained in rules 373 and 374, within the event of grave disorder occasioned by a Member coming into the well of the House or abusing the Rules of the House persistently and wilfully obstructing its business by shouting slogans or otherwise, such Member shall, on being named by the Speaker, stand automatically suspended from the service of the House for five consecutive sittings or the rest of the session, whichever is less."

- "Provided that the House may, at any time, on a motion being made, resolve that such suspension be terminated."

Mainly it's similar with one important difference.

- Like Lok Sabha Speaker, the Rajya Sabha chairman is additionally empowered under the Rule Number 255 of its Rule Book.

- Unlike the Speaker of Lok Sabha, the Rajya Sabha Chairman doesn't have the power to suspend a Member. Therefore, the Hosue may by another motion, terminate the suspension.

- The Chairman may "name a Member who disregards the authority of the Chair or abuses the rules of the Council by persistently and wilfully obstructing" business.

- In this type of situation, the House may adopt a motion suspending the Member from the service of the House for a period not exceeding the remainder of the session.
Suspension of an MP is a common practice or not

- It is not an uncommon procedure but yes a strong action.

- It is necessary and can't be questioned that the enforcement of the supreme authority of the Presiding Officer is essential for the smooth conduct of proceedings.

- Therefore, it should be remembered that the job of the Presiding Officer is to run the House, not to lord over it.
- On 5 March, 2020, seven Congress members were suspended from Lok Sabha during the Budget Session of Parliament. The seven Congress members were Gaurav Gogoi (Kaliabor), T N Prathapan (Thrissur), Dean Kuriakose (Idukki), Rajmohan Unnithan (Kasaragod), Manickam Tagore (Virudhunagar), Benny Behanan (Chalakudy), and Gurjeet Singh Aujla (Amritsar).

- Birla’s predecessor in the Speaker’s Chair, Sumitra Mahajan, suspended a total of 45 Members belonging to the TDP and AIADMK after they continuously disrupted proceedings for days in January 2019.

- Nine Members were suspended for five days on 2 September, 2014.

- Speaker Meira Kumar suspended 18 MPs from (undivided) Andhra Pradesh following pandemonium in the House on 13 February, 2014..etc.
Is there any alternative to suspension

- For unruly behaviour, the solution has to be long-term and consistent with democratic values.

- In fact, a previous Speaker had ordered that television cameras be focussed on the demonstrating members so that people could see themselves how their representatives were behaving in the House.

Important Features of the Indian Constitution

All about the Parliament of India