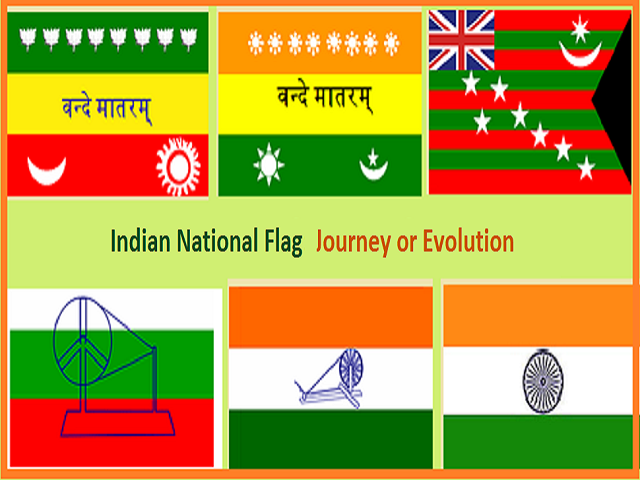 Journey of the Indian National Flag

Republic Day 2021: On 26 January, 1950, India declared itself a Sovereign, Democratic and Republic state with the adoption of the Constitution. The 21 guns salute and unfurling of the Indian National flag by the first President of India Dr. Rajendra Prasad gave the historic birth of the Indian Republic. Thereafter 26 January was recognised as the Republic Day of India and decreed a national holiday.

This year due to the COVID-19 pandemic, the event of Republic Day will be pared down in terms of the number of spectators, the size of marching contingents, and other side attractions. The size of the spectator has been reduced to 25,000from around 1.25 lakh last year.

Also, the tickets for the General Public has been limited to 4,500 this year. The size of marching contingents has been reduced from 144 to 96 due to social distancing norms. The parade will also be shorter this year.

Mahatma Gandhi, Bapu of our Nation said "A flag is a necessity for all nations. Millions have died for it."

“It will be necessary for us Indians Muslims, Christians Jews, Parsis, and all others to whom India is their home-to recognise a common flag to live and to die for."

The National Flag of India has a horizontal strip of three colours including deep saffron (Kesaria) at the top, white in the middle, and dark green at the bottom. The ratio of the flag width to its length is 2:3. In the white band, at the centre, a Navi-blue wheel is there which represents the chakra.

Do you know what these colours indicate?

- The top saffron colour indicates the strength and courage of the country.

- The green shows the fertility, growth, and auspiciousness of the land.

- The design of the wheel appears like the wheel on the abacus of the Sarnath Lion Capital of Ashoka. Its diameter is approximate to the width of the white band and it has 24 spokes.

Let us tell you that on 22 July 1947, the design of the National Flag was adopted by the Constituent Assembly of India.

Now, we shall study the evolution or Journey of tricolour National Flag of India

Several changes took place in our National Flag since its first inception. Through several vicissitudes, our National Flag evolution sailed to arrive at what it today is. We can say that it reflects the political developments in the nation. The historical milestones in the evolution of the National Flag are as follows:

1. The evolution of the Indian flag dates back to the pre-independence era. In 1904-1906, the first Indian flag came into existence and it was made by an Irish disciple of Swami Vivekananda, Sister Nivedita. After some time the flag came to be known as Sister Nivedita's flag. The flag comprised of red and yellow colours. Red signified the freedom struggle and yellow, a symbol of victory. In Bengali's words "Bonde Matoram" was written. It also contained a figure of 'Vajra', the weapon of god 'Indra', and a white lotus in the middle. The symbol 'Vajra' depicts strength and lotus purity.

2. Another flag was also designed in 1906. It was tricolour flag with three equal strips of blue at the top, yellow in the middle, and red at lower. The blue strip consists of eight stars of slightly different shapes. The red strip had two symbols, one of the sun and the other of a star and a crescent moon. In the yellow strip, 'Vande Mataram' was written in Devanagari script.

3. On 7 August, 1906, the first unofficial national flag in India have been hoisted in the Parsee Bagan Square (Green Park) in Calcutta now Kolkata. The flag consists of three horizontal stripes of red, yellow, and green colour. It came to be known as 'Calcutta Flag or 'Lotus Flag'. In the middle of it is written Vande Matram. The red strip had two symbols, one of the sun and the other a crescent moon. The green strip had eight half-open lotuses on it. It is believed that the flag was designed by Sachindra Prasad Bose and Sukumar Mitra. Let us tell you that the unfurling of the flag was being observed as "boycott day" against the partition of Bengal and the flag was hoisted by the Surendranath Banerjee to mark the unity of India.

4. On 22 August, 1907, the flag was unfurled by Madam Cama at Stuttgart, Germany. It is believed that the flag was collectively designed by Madam Cama, Vinayak Damodar Savarkar, and Shyamji Krishna Varma. The flag attained the status of the first Indian flag that was hoisted in a foreign land. It was also referred to as the "Berlin Committee flag". The flag was similar to the first flag except that the top strip. It also consists of three colours namely green at the top, golden saffron in the middle, and red colour at the bottom.

5. In 1916 Pingali Venkaya also designed a flag after the approval from Mahatma Gandhi. Pingali Venkaya was a writer and a geophysicist. Mahatma Gandhi told him to incorporate a charkha in the flag as a symbol of the economic regeneration of India. He created a flag from handspun yarn 'Khadi' and had two colours namely red and green and the 'Charkha' was drawn across them. But Mahatma Gandhi did not approve it. According to him, the red represented the Hindu community and the green Muslims, but the other communities of India were not represented in the flag.

6. In 1917, the Home Rule League adopted a new flag. Let us tell you that the Home Rule League was formed by Bal Gangadhar Tilak. It was the time when Dominion status was being demanded for India. The flag consists of the Union Jack at the top, near the hoist. The rest of the flag had five red and four blue strips. In the shape of the 'Saptarishi' constellation, it had seven stars. It consists of a crescent moon and a star at the top fly end. But this flag did not gain popularity among the masses.

7. In the All India Congress Committee session which took place at Bezwada in 1921(now Vijayawada) an Andhra youth prepared a flag and took it to Gandhiji. The flag was made up of two colours red and green that represent the two major communities Hindus and Muslims. At that time Gandhiji suggested adding a white strip in the flag that will represent the other communities of India and the spinning wheel to symbolise the progress of the nation. We can say that the flag was unofficially adopted in 1921.

8. In the history of the flag, 1931 year is important. This year, a resolution was passed of adopting a tricolour flag as our national flag. It consists of three colours including saffron, white, and green with Mahatma Gandhi's spinning wheel at the center. It also stated that it bore no communal significance and was to be interpreted thus. Therefore, we can say that this flag was adopted in 1931.

9. The Constituent Assembly on 22 July, 1947 adopted it as Free India National Flag. After Independence, the colours and significance remained the same. Only the change that took place was instead of the spinning wheel, the Dharma Chakra of Emperor Ashoka was adopted as the emblem of the national flag. Eventually, the tricolour flag of the Congress Party became the tricolour flag of Independent India.

What is Flag Code?

The Flag Code of India was modified on 26 January, 2002 and after several years of independence; the Indian citizens were finally allowed to hoist the flag of India over their homes, offices, and factories on any day and not just the National days as was the case earlier. According to the flag code, any Indian can proudly display the national flag anywhere and anytime, but should not disrespect the tricolour. Therefore, the Flag Code of India, 2002, has been divided into three parts. In Part I, a general description of the National Flag is given. In Part II, it is mentioned that the display of the National Flag members of the public, private organisations, educational institutions, etc. In Part III, display of the National Flag by Central and State Governments and their organisations and agencies. Let us tell you that there are some rules and regulations upon how to fly the flag according to the 26 January, 2002 legislation.

So now, you may have come to know about the journey of evolution of the National Flag of India.