Forbes' World's Billionaires list was released and 234 women from around the have found their names on the list this year. Also, a familiar face returns as the world's richest woman. Stock prices and exchange rates are used by the Forbes from 18 March, 2020 to calculate the net worths. Let us have a look at the list of 10 richest women in the world and some facts about them. 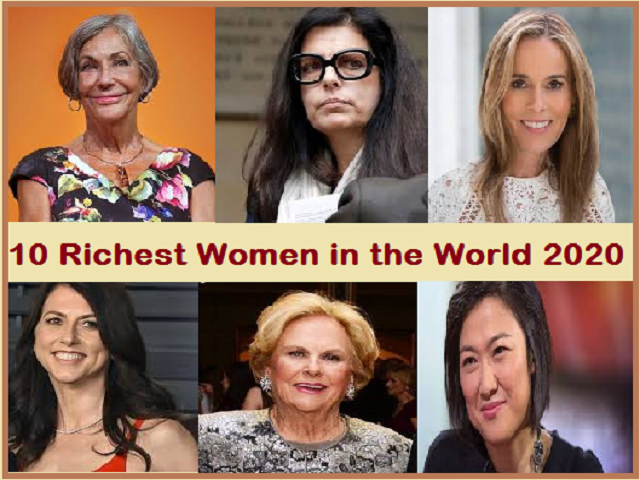 This year, 234 women made the list and last year it was 244. The women on the list are worth $927.4 billion as a group. Despite recent economic instability, they are collective $29.4 billion richer than last year. Let us tell you that seven women additionally share their fortunes this year with either their husband, child, or sibling. Last year nine women shared their fortunes.

In the list nineteen women are new. Of these women, the richest newcomer is Julia Koch, who inherited her husband David Koch's fortune after he died in August 2019. Another newcomer in the list is MacKenzie Bezos, who gained her fortune after finalising her divorce with the world's richest man, Jeff Bezos, last summer.

Another new is Neerja Sethi to the list, co-founded IT consulting and outsourcing firm Syntel together with her husband named Bharat Desai. She is one of the 67 self-made women who appeared on this year's list which is slightly down from 68 self-made women last year. A self-made newcomer is Qian Ying, cofounder Shenzen-listed Muyan Foods with her husband Qin Yinglin.

According to the estimation of the Forbes' list, top 10 richest women in the world; Net worth are as of 18 March, 2020 are as follows:

She is Australia's richest person who built her fortune on iron ore. She is the daughter of Lang Hancock an iron-ore explorer. She has been the chairperson of mineral extracting company Hancock Prospecting Group since 1992. Let us tell you that the biggest piece of her fortune came from the Roy Hill mining project, which started shipments to Aisa in 2015. Also, the mining magnate is Australia's third-largest cattle producer, with a portfolio of properties across the country. Her fortune declined by $2 billion in the past year, due to the coronavirus pandemic that pushed down the values in the iron ore industry.

She chairs Chinese drugmaker Hansoh Pharmaceutical. The company produces oncology, psychoactive, anti-diabetic, and other drugs. When the COVID-19 pandemic was most prevalent in her home country, the stock rose to 10% from early January through mid-March.  She is married to Sun Piaoyang who is the billionaire chairman of Jiangsu Hengrui Medicine. She owns over three-quarters of Hansoh Pharmaceutical with their daughter, Sun Yuan. Hansoh Pharmaceutical headquarter is located in the Chinese coastal city of Lianyungang. Hansoh went public on the Hong Cong stock Exchange in June 2019.

She is the widow of late Apple co-founder Steve Jobs (d. 2011). She heads Emerson Collective, a hybrid philanthropic and investing limited liability company and she founded it in 2016. She bought a minority stake in 2017 in the parent of the NBA's Washington Wizards and the NHL's Washington Capitals. In various media outlets also she has purchased stakes including a majority of The Atlantic magazine and all of California Sunday and Popup Magazine. Through Emerson Collective, she has been putting her fortune to work. The Emerson Collective Foundation is launched by her during the second half of 2016 with a gift of $1.2 billion and much of it in Disney shares. From last year, her fortune is down $2.2 billion in part due to a decline in Disney's share price.

Susanne Klatten is an heir to carmaker BMW and it has seen that her net worth tumble 20% in the last year. Due to the COVID-19 pandemic, car sales slowed down and BMW's stock fell 24% in the first half of March. She is also the sole owner and deputy chairman of Atlanta which is a pharmaceutical and specialty chemical corporation. Her late mother, Johanna, was the third wife of legendary industrialist Herbert Quandt. He guided BMW to preeminence in the luxury market. Susanne Klatten is an economist with an M.B.A helped transform her grandfather's Atlanta AG into a world-class pharmaceutical specialty chemical corporation. She holds stakes in wind power outfit Nordex AG and carbon and graphite producer SGL Group.

She owns 57% and is on the board of Hong Kong-listed real estate developer Country Garden, which her father has founded and chairs. Her young sister Ziyang also sits on Country Garden's board. She also chairs Bright Scholar Education Holdings which is a Chinese education company that went public on the New York Stock Exchange in 2007. She holds a degree from Ohio State University. During the COVID-19 pandemic, the company has set-up robotic, automated food serving stations in Wuhan, the place where the coronavirus originated to feed Chinese medical workers.

Jacqueline Mars and her brother named John, each inherited one-third &35 billion (sales) candy company which is known for M&Ms and Milky Way bars. Also, her late brother Forrest Jr's four daughters own the rest of Mars, which also has a big pet food and vet care business. For nearly 20 years, Jacqueline Mars worked for the company served on the board until 2016. The chairman of Mar's board of directors is her son Stephen Badger.

In July 2019, she finalised a divorce with Amazon founder Jeff Bezos and she makes her debut on the list. She received a quarter of her ex-husband's shares in the e-commerce giant. She also signed a Giving Pledge, promising to offer away at least a minimum of half of her fortune in May 2019. She is an author and in 1992, she met Jeff when they both worked at hedge fund D. E. Shaw. They married next year and in 1994, moved to Seattle. Bezos has published two novels. He was a student of author Toni Morrison at Princeton and worked as a research assistant for her. She founded the Bystander Revolution which is an anti-bullying organisation in 2014.

She is new on this year's list. She joined the billionaires rank after she and her three children inherited a 42% stake in Koch Industries from her husband David. He died in August at the age of 79. In the 1980s, she moved to New York City and worked as an assistant to fashion designer Adolfo. She also worked with several high-profile clients, including First Lady Nancy Reagan. In 1991, Julia met David and got married in 1996. She with her husband has donated $10 million to Mount Sinai Medical Center and $10 million to Stanford's Children's Hospital to study food allergies.

She is the granddaughter of the L'Oreal founder Eugene Schueller and became France's reigning L'Oreal heiress in 2017 after her mother Liliane Bettencourt died at the age of 94. She was the world's richest woman. Since 1997, she has served L'Oreal's board and is chairwoman of the family holding company. Due to the COVID-19 pandemic, the fortune of Bettencourt Meyer's declined $400 million since last year's list because shares of the cosmetics giant dropped that is 12% in the first two weeks of March. The company announced in March, that its factories will generate hand sanitizer to support the need of the French and European health authorities.

She is the only daughter of the founder of Walmart Sam Walton. She focused on curating art, rather than working for Walmart like her brothers Rob and Jim. She opened the Crystal Bridges Museum of American Art in 2011 in her hometown, Bentonville, Arkansas. Sam Walton became the richest woman in the world after losing the spot to L'Oreal heiress Francoise Bettencourt Meyers in 2019. There is market turbulence all over the world but Walton's fortune increases 23% since last year. She does not have a role in Walmart but helping to lead a program the Walton family foundation that will issue $300 million in bonds to help charter schools to invest in it and to renovate the facilities.

These are the 10 Richest women in the world that will help you to prepare for several competitive examinations and also enhance knowledge.