Salt March is also known as Salt Satyagraha, Dandi March or Civil Disobedience Movement. The Salt Satyagraha was initiated by Mahatma Gandhi against the salt tax that was imposed by the British Government in India. It was a mass civil disobedience movement. Let us read in detail about Gandhi's Salt March. 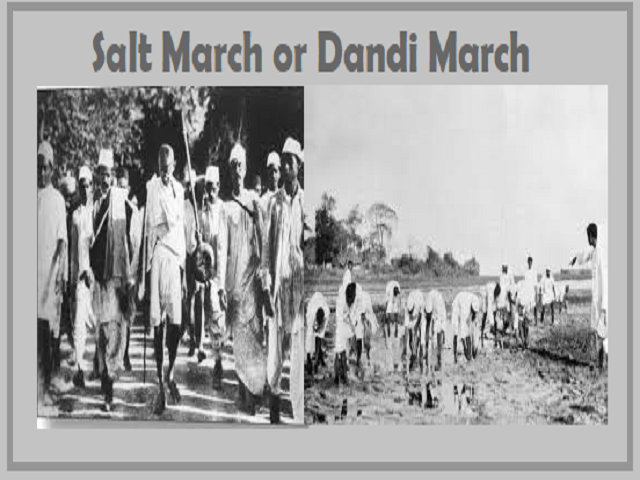 As we know that the major non-violent protest was led by Mahatma Gandhi in India during the struggle for freedom and Salt Satyagraha was one of them. It was started in March-April 1930. The Salt March began with around 80 people, it was 390 km-long journey and later it grew into a strong force of around 50,000 people.

Why does Salt Satyagraha begin?

The Congress Party in the Lahore session of December 1929, passed the Purna Swaraj resolution. It was proclaimed on 26 January, 1930 and decided that civil disobedience was the way to achieve it. Mahatma Gandhi chooses the path of non-violence to break the salt tax against the British government. The then, Viceroy Lord Irwin could not prevent the salt march from taking place.

Salt was a commodity used by all people of every community and the poor people were affected more by the salt tax. Until the passing of the 1882 Salt Act, Indians were making salt from seawater free of cost. But the Salt Act gave British monopoly over the production of salt and authority to impose a salt tax. Violation of the Salt Act was a criminal offence. With the Salt Satyagraha, Mahatma Gandhi tried to unite Hindu and Muslims because the cause was common. Let us tell you that 8.2% of the salt tax accounted for the British Raj revenue from the tax.

Due to the Salt Act, the population of India was not able to sell salt independently and instead, Indians were required to buy expensive, heavily taxed salt that often was imported. A great majority of Indians are affected and poor were even not able to afford to buy it.

From where Salt March or Dandi March begins?

On 2 March, 1930, Mahatma Gandhi informed about the plan of Salt March to Lord Irwin. He told that on 12 March, 1930, he would begin the Salt March with few dozen people from his Sabarmati Ashram near Ahmedabad to break the Salt Law. During the march, he with his followers will pass through several villages of Gujarat. The distance of the Salt March was 240 miles (385 Km) starting from Sabarmati Ashram to the coastal town Dandi on the Arabian Sea. On the way, thousands of people joined him. Sarojini Naidu also joined the movement. Every day more and more people joined him and finally, on 5th April, 1930, they reached Dandi. On 6 April, 1930, Mahatma Gandhi with followers broke the salt law by generating salt from seawater. It is said that this time there were around 50,000 people who had participated in the salt march.

As a result, Civil disobedience movement broke out all across the country, millions of Indians joined and British authorities arrested more than 60,000 people. On 5 May, Mahatma Gandhi was also arrested, but the Satyagraha continued without him. Apart from the salt tax, several other unpopular tax laws were also disobeyed including the forest laws, chowkidar tax, land tax, etc. The British government tried to suppress the movement. The Congress party was declared illegal.

Another similar march was started by C Rajagopalachari on the south coast from Trichy to Vedaranyam in Tamil Nadu. He was also arrested for making salt. In the Malabar region, K Kelappan led a march from Calicut to Payyanur. Several marches continued and salt was produced illegally in Assam and Andhra Pradesh. Another Satyagraha was organised in Peshawar, led by Mahatma Gandhi's disciple, Ghaffar Khan. He was arrested in April 1930.

In Salt Satyagraha, thousands of women also participated, people boycotted foreign materials like clothes, Liquor shops were picketed. There were strikes all over. On 21 May, 1930, Sarojini Naidu led a protest against the Dharsana Salt Works by non-violent protestors. To suppress the movement, Britishers lathi-charged the protestors which resulted in the deaths of two and several protestors were injured. No doubt, for the British Government, it became difficult to suppress it violently.

Therefore, we can say that the main effects of Salt March or Salt Satyagraha were:

- A lot of people came together and protest for the same cause including women, depressed class.

- The movement showed the power of non-violence in fighting against colonialism for the freedom struggle.

- In 1931, Mahatma Gandhi was released and met Lord Irwin who wanted to put an end to the civil disobedience movement. As a result, Gandhi-Irwin pact was signed, the civil disobedience movement ended and Indians were allowed to make salt for domestic use. Arrested Indians were also released. The Second Round Table Conference was attended by Mahatma Gandhi in London.

Finally, India got its Independence in August 1947 after few years of Salt March. But we can't ignore that the movement raises international awareness of the injustice done by the Britishers in India. Methods of Mahatma Gandhi paved a way for freedom struggle and became a famous figure around the world.