Shaheed Rajguru Birth Anniversary:10 key facts to know about him

Shaheed Rajguru Birth Anniversary: He was born on 24 August, 1908 into a Deshastha Brahmin family at Khed near Pune, Maharashtra, British India. His full name was Hari Shivaram Rajguru. On his birth anniversary let us have a look at 10 key facts about his life history, freedom struggle, etc. 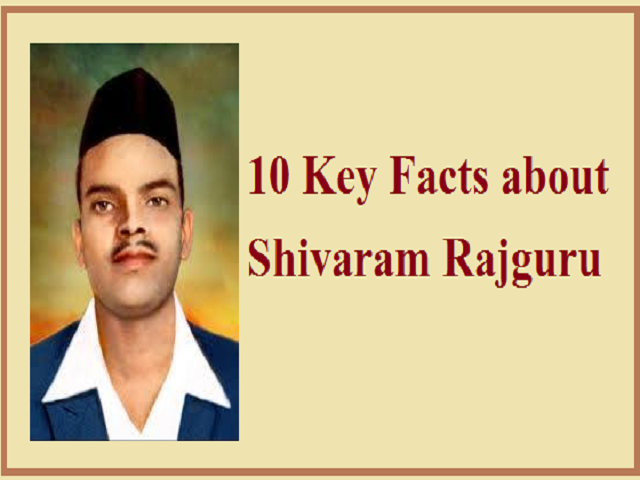 Shaheed Rajguru Birth Anniversary: At a very early age he came in contact with the Indian revolutionaries and played a major role in India's struggle for Independence. He was born on 24 August, 1908 into a Deshastha Brahmin family at Khed, Pune, Maharashtra, British India. His full name was Hari Shivaram Rajguru.

1. Shivaram Rajguru was an Indian revolutionist from Pune, Maharashtra. He was born at Khed near Pune on 24 August, 1908 to Parvati Devi and Harinarain Rajguru. The birthplace Khed near Pune has been renamed as Rajgurunagar in his honour.

2. At Hisar Haryana, there is a shopping complex known as Rajguru Market. In 1953, this complex was named in his honour.

3. He was good at studies. His father died when he was only six years old. His brother took care of him and a widowed mother. His family had some dreams for Shivaram Rajguru but destiny was different. He was inspired by the Lokmanya Tilak's revolutionary ideas.

4. At the age of about 15, he went to Varanasi and took admission to a school for Sanskrit where he found his fellow revolutionaries. It is said that to reach Varanasi, he walked six days.

5. He joined the Hindustan Socialist Republican Army. The main aim was to overthrow the British colonisers. He wanted to gain Indian freedom from British rule by any means required.

6.  He became a colleague of Bhagat Singh and Sukhdev and took part in the assassination of a British Police officer J.P Saunders at Lahore in 1928.

7. Their actions of killing the British officer were to avenge the death of Lala Lajpat Rai who had died in a protest against the Simon Commission in October 1928. Due to the Lathi charge by the British police in the protest, Lala Lajpat Rai injured very badly and died.

8. After the assassination, Rajguru then went into hiding in Nagpur. He took shelter in the house of an RSS worker and also met Dr. K. B. Hedgewar. But on his travel to Pune, he however was finally arrested.

9. The three brave revolutionaries Bhagat Singh, Sukhdev and Rajguru were hanged on 23 March, 1931. Their bodies were cremated on the banks of the River Sutlej.

10. Shivaram Rajguru was only 23 years old when he became a martyr. He was known to have a fearless spirit and unconquerable courage. And also regarded as the gunman of Bhagat Singh's party.

He joined the revolutionaries at a young age due to the brutal atrocities that the Imperial British Raj inflicted on India. However, in the pages of Indian history, Shivaram Rajguru will always be remembered for his valour and dedication of his life towards India’s independence.