SITMEX-20: What is Trilateral Maritime Exercise between India, Singapore and Thailand?

SITMEX-20 is a two days maritime drill between India-Singapore-Thailand that aims to strengthen relations amongst the three nations. 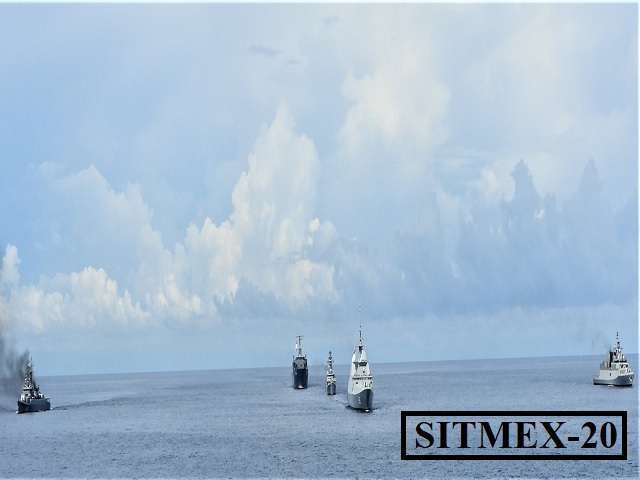 Amid the ongoing COVID-19 pandemic, the two days maritime drill was conducted as a 'non-contact, at sea only' and was concluded in the Andaman Sea.

1- The 2020 edition of the trilateral maritime exercise was hosted by Republic of Singapore Navy (RSN).

2- RSN was represented by the ‘Formidable’ Class frigate ‘Intrepid’ and ‘Endurance’ Class Landing Ship Tank ‘Endeavour’ in the maritime drill.

3- RTN was represented by the ‘Chao Phraya’ Class frigate ‘Kraburi’ in the naval exercise.

In June 2018, during his address at Shangri-La Dialogue, Prime Minister Modi announced about the annual trilateral maritime drill between India, Singapore and Thailand.

In 2019, the first edition of Singapore-India-Thailand Maritime Exercise (SIMTEX) was hosted by Indian Navy (IN) and was conducted off Port Blair. It is in line with vision SAGAR.

What is Mission Sagar?

The SIMTEX aims to improve the interoperability between the three Navies-- Indian Navy (IN), Republic of Singapore Navy (RSN) and Royal Thai Navy (RTN). This naval drill also aims to enhance maritime security in the Indo-Pacific region.

The 27th edition of  India - Singapore Bilateral Maritime Exercise (SIMBEX) is underway and will be concluded by 25 November 2020  in the Andaman Sea. SIMBEX-20 is hosted by Indian Navy (IN) and has been conducted annually since 1994.