The Annular Solar Eclipse will be visible from Northern India and other countries. In this eclipse, the sun will appear as a necklace of pearls during its maximum phase for 30 seconds only.

The Annular Solar Eclipse is approaching on 21 June 2020 at 9:15 am IST. Annular Solar Eclipse will start its annularity on 21 June from the Central African Republic in the morning hours and then proceeds to Congo, Ethiopia, Yemen, Saudi Arabia, Oman, Pakistan, India, China and Taiwan. In the South Pacific Ocean, it will end in the evening. Only four states of Northern India will witness the annularity including Rajasthan, Haryana, grazing parts of Uttar Pradesh and Uttarakhand. However, the partial phase of the eclipse will be witnessed by entire India.

What is Solar Eclipse?

Solar Eclipse occurs when the Moon comes in between the Sun and the Earth. As a result, the visible disc of the Sun is partially or fully covered by the Moon. The shadow of Moon travels over the surface of the Earth and blocks out the Sun's light as seen from the Earth. It is a celestial phenomenon that does not occur very often. 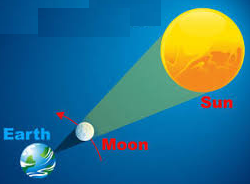 The Moon orbits the Earth at an angle approximately 5 degrees relative to the Earth-Sun plane and it crosses the orbital plane of the Earth only twice a year. These times are known as eclipse seasons because at this time only eclipses occur. For the formation of an eclipse, Moon must be in the correct phase and that too during an eclipse season. Let us tell you that, for Solar Eclipse, it must be a New Moon. This condition makes solar eclipse relatively rare to occur.

However, viewing the Sun during partial and annular eclipses requires a special type of eye protection or indirect viewing methods.

The first event is the New Moon. At this phase: the Moon occurs when the Sun is almost directly behind the Moon and we see only a silver of the Sun's light reflected by the Moon. During this time the Moon and the Sun appear close together.

The Second event: Moon must be in the right position, directly in the line of sight between the Earth and the Sun. These two events occur at the same time about once every year and a half.

The shadow of the Moon has two parts: a central region known as umbra and another region is known as the penumbra. Depending upon which part of the shadow passes, three types of solar eclipses visible to you namely:

Let us explain the phenomena: 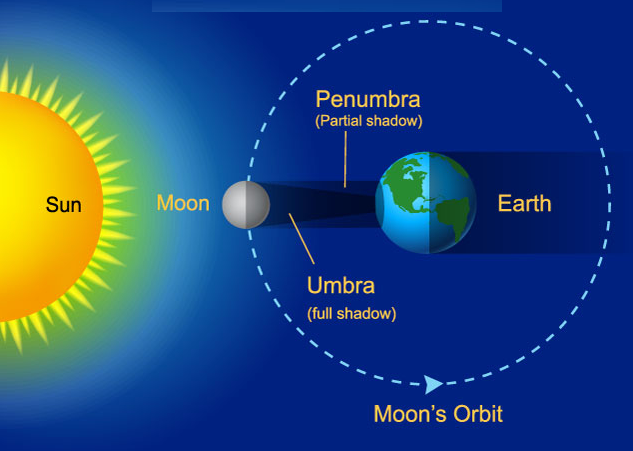 A Solar Eclipse occurs when the Moon, revolving in its orbit around the Earth, moves across the disk of the Sun and shadow of the Moon sweeps over the surface of the Earth. Sunlight doesn't penetrate the umbra that is the inner part of the shadow. To the observers on the Earth within the umbra, the disk of the Sun will appear completely covered by that of the Moon and such type of eclipse is known as Total Solar Eclipse. Because at its intersection with the Earth the umbra is narrow and the Total Solar Eclipse can be observed only within a very narrow area that is the zone of totality. Let us tell you that the totality of the solar eclipse lasts only for a short time.

To the observers located at the penumbra that is the outer portion of the Moon's shadow, the disk of the Moon will appear to be projected against the Sun so as to overlap it in part. This forms a Partial Solar Eclipse. It happens because the Earth revolves around the Sun in an elliptical orbit and the distance of the Sun changes slightly during the course of a year.

If an eclipse occurs when the Sun is closest to the Earth and the Moon is farthest away then the Moon will not be able to cover the Sun and leave the rim of the latter all around it. This is known as an Annular Solar Eclipse. A small, ring-like silver of light is seen from the Sun's disc.

So, now you may have understood the phenomena of Solar Eclipse, its types and how it occurs?