Surrogacy in India: History, Impact on poor and facts

As we know that the Union Cabinet approved the Surrogacy (Regulation) Bill after incorporating the changes as per the recommendation of a Rajya Sabha Select Committee. The Bill aimed at banning commercial surrogacy and allowing altruistic surrogacy as per Mr. Javadekar. 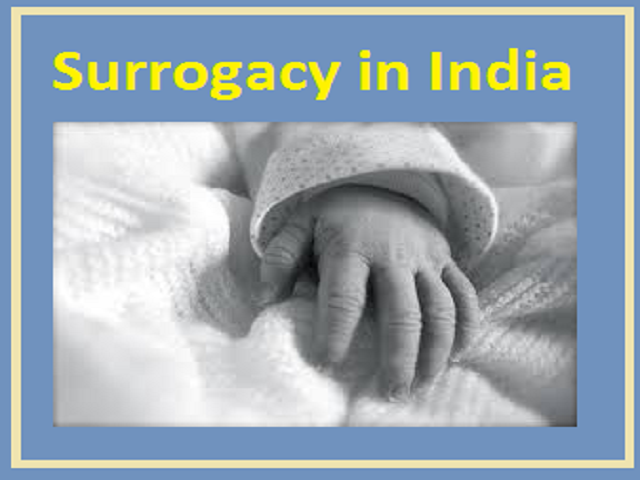 The Union Cabinet approved the Surrogacy (Regulation) Bill that permits a "willing' woman to be a surrogate mother and also proposing a bill would benefit widows and divorced women besides infertile Indian couples. What is Surrogacy, history of surrogacy, commercial surrogacy banned in India and its impact on the poor, etc?

The 23-member committee suggested the 15 major changes to the Surrogacy (Regulation) Bill, 2019. It also included deleting the definition of "infertility" as the inability to conceive after five years of unprotected intercourse on the ground that it was too long a period for a couple to wait for a child.

Let us tell you that to regulate surrogacy the Bill proposes by establishing a National Surrogacy Board and State Surrogacy Boards and appropriates authorities within the States and Union Territories respectively. For a Surrogate mother, the proposed insurance cover has now been increased to 36 months from 16 months earlier.

The 'Surrogate" word has its origin within the Latin term Surrogatus' meaning a woman acts as a substitute for another woman. It is a method of assisted reproduction or assisted reproductive technology (ART) where on behalf of another person or couple a woman or the surrogate offers to carry a baby through pregnancy and then return the baby to the intended parent(s) once it is born and also in return will get compensation as agreed.

No doubt it is a highly complex process and there are several important steps to ensure that both parties make the best decisions. In surrogacy, an embryo is created using an egg and sperm that is produced by the intended parent(s) or donors and is transferred into the uterus of the surrogate. There is no genetic link to the surrogate with the child. Her eggs cannot be used to conceive the child.

List of major labour laws in India: A Brief Introduction

In 2002, commercial surrogacy or informally 'Rent a Womb' practice, was legalised in India. It was done to promote medical tourism in India and after this decision, India became "the hub of surrogacy". The main reason being the low cost in India that is in the U.S it cost approx $100,000 and also the absence of strict legislation. As per the CII report 2012, the size of India's surrogacy industry was $2 billion a year. And it was estimated that more than 3,000 fertility clinics were engaged in this across the country.

The unregulated business of surrogacy raised concerns like unethical practices, due to it the middlemen and commercial agencies profited most, exploitation of surrogate mothers, abandonment of children born out of surrogacy, rackets like organ trade, embryo import, etc. That is why legislation to regulate surrogacy in the country came in to force.

What are the recommendations of the Law Commission of India?

It highlighted that there is a need to enact a law to regulate commercial surrogacy. The LCI in the 208th report recommended prohibiting commercial surrogacy. Reasons were:
- Use of surrogacy prevalently by the foreigners.
- Lack of a proper legal framework.
- Surrogate mother exploitation may have been coerced to become a surrogate due to poverty and lack of education.

Therefore in 2015, the notification of the government of India prohibited surrogacy for foreign nationals. In Lok Sabha, the first Surrogacy (Regulation) Bill was introduced in 2016 and lapsed after Parliament was dissolved.

The Surrogacy (Regulation) Bill 2019 was introduced in Lok Sabha 15 July, 2019  and passed by Lok Sabha on 5 August, 2019. Further, for more discussion, it was referred to a Select Committee.

Let us have a look at the Surrogacy (Regulation) Bill 2019

At national as well as state levels there will be Constitution of surrogacy boards and it allows only ethical altruistic surrogacy.

Who will be eligible for Surrogacy?

Who can be a surrogate mother?

A close relative of the intending couple, the woman must be married having a child of her own and she should be between the age of 25-35 years. No previous surrogacy.

Insurance coverage for some time to cover not only the period of pregnancy but after that also for surrogate mother. The Bill also seeks to manage the functioning of surrogacy clinics. Further, surrogacy clinics in the country need to be registered. When it comes to surrogacy then no sex selection can be done.

What are the reasons behind banning Indian Surrogacy?

- When an Indian surrogacy first became a booming industry, there were no regulations in place, and unsafe and unethical practices developed in response.

- Due to the demand from international intended parents, Indian surrogacy agencies effectively ran "baby factories". Here, Indian women were forced to live until they gave birth to the intended parent's babies with no assistance for the family and they had left behind while pregnant.

- It is also said that the surrogates in India received a fraction of the expenses that intended parents paid the surrogacy agency about $4000 to $5000 for compensation.

-Surrogates were exploited in commercial surrogacy.

- For the financial gain, their poverty and lack of education drew them again and again into the surrogacy process. As a result, their health decline as they effectively became "baby-making machines" year after year.

- Surrogate mothers don't even receive the kind of supportive services that need for themselves and their family during this emotional journey.

Due to all these reasons, the Indian government attempted to take steps to make the process safe for all involved.

Let us have a look at the international level

- Altruistic surrogacy is allowed in Canada, Britain, Australia, and Denmark.

- All forms of surrogacy are completely prohibited in France, Germany, Italy, Portugal, and Bulgaria.

- Some countries allow surrogacy like Kenya, Malaysia, and Nigeria but have no formal law to regulate the practice.

- The laws related to surrogacy vary in the USA from state to state like surrogacy friendly states like Arkansas, California, New Hampshire, etc .allow both commercial and altruistic surrogacy. Commercial surrogacy is not allowed in New York and Michigan completely forbids surrogacy agreements.

We can say that surrogacy is an important issue need to be discussed in detail.

18 Laws and Rights must be known to every Indian