What is a Tropical Cyclone, how is it formed and its effects?

When a system of winds rotates inwards at a high speed with an area of low pressure in the middle is known as a cyclone. Read more about the tropical cyclone, how is it formed, and its effects. 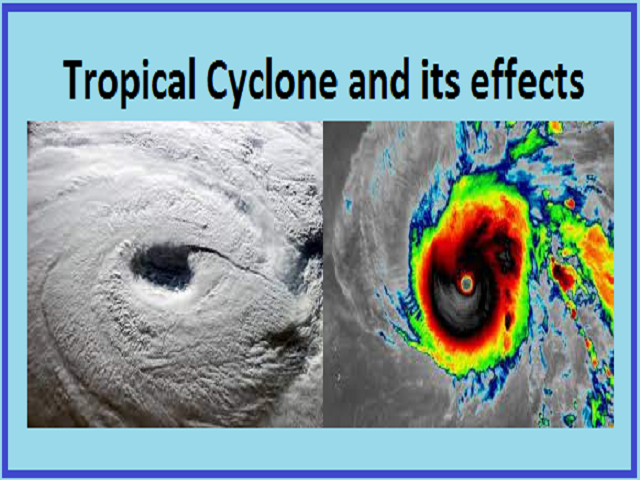 Tropical cyclones poses threat to life and property even in the formative stages of their development. Different hazards that can individually cause significant impacts on life and property include storm surge, flooding, extreme winds, tornadoes and lighting.

Tropical cyclones are intense circular storms that originate over the warm tropical oceans with more than 119 kilometres per hour speed and heavy rains.

Tropical cyclones are among the foremost destructive weather phenomena and also known as typhoons or hurricanes.

On the way of origination, tropical cyclones are known by different names in the world.

- In the Atlantic Ocean and the eastern North Pacific Ocean, it is known as Hurricanes.

- In the western Pacific Ocean, it is known as Typhoons.

- In the South Pacific Ocean and the Indian Ocean, it is known as Tropical cyclones.

Tropical cyclones are characterised by low atmospheric pressure, high winds and heavy rain. In extreme condition, the winds may exceed 240 km per hour and gusts may surpass 320 km per hour. These strong winds may cause torrential rains and devastating phenomena known as the storm surge. Basically, it is an elevation of the sea surface that can reach 6 metres above normal levels. In tropical and subtropical areas of the world, such cyclones with a combination of high winds and water cause a serious hazard for coastal areas.

Depending upon the maximum sustained wind, tropical cyclones will be designated as follows:

- When the maximum sustained speed is less than 63 km/h it is known as a tropical depression.

- When the maximum sustained speed is more than 63 km/h then it is known as a tropical storm. It is then also given a name.

In fact, the strength of the hurricane also varies from Category 1to 5 according to the Saffir-Simpson Hurricane Wind Scale in use in the Caribbean Sea, the Gulf of Mexico, the North Atlantic Ocean and therefore the eastern and central North Pacific Ocean.

- Category 1: Mentioned the Hurricane with the utmost sustained wind speeds of 119-153 km/h.

- Category 2: Mentioned the Hurricane with the utmost sustained wind speeds of 154-177 km/h.

- Category 3: Mentioned the Hurricane with the utmost sustained wind speeds of 178-209 km/h.

- Category 4: Mentioned the Hurricane with the utmost sustained wind speeds of 210-249 km/h.

Amphan Cyclone: All you need to know

- It Increases the cases of drowning and other physical trauma.

- It also increases the danger of water and vector-borne infectious diseases.

- Disrupt health systems, facilities and services. It also left communities without access to health care once they are needed most.

It is also said that the impact of tropical cyclone also depends upon the number of individuals living in low-lying coastal areas within the storm's direct path, the built environment like the design of the building and also on the sufficient time for warning and evacuation.

The risk of drowning and water or vector-borne diseases increases when tropical cyclones cause floods and sea surges. Flood water may contain sewage and chemicals, hide sharp objects that are made from metals or glass and electrical lines or host dangerous snakes or reptiles that may result in injuries, electrocution, bites and can also cause diseases. According to WHO, around 726 million people were affected due to storms worldwide between 1998-2017.

Tropical cyclones winds swirl around a central region of low atmospheric pressure. The wind is caused due to the low-pressure core and by the rotation of Earth, which further deflects the path of the wind via a phenomenon known as the Coriolis force. In the Northern Hemisphere, tropical cyclone rotates in a counter-clockwise or cyclonic direction and in the Southern Hemisphere, it rotates in a clockwise or anticyclonic direction.

Tropical cyclone wind field may be divided into three regions:

1. Ring-shaped outer region and an inner radius of about 30 to 50 km. In this region, the speed of the wind increases uniformly toward the centre.

2. At the second region that is the eyewall, wind speed attains their maximum value which is typically 15 to 30 Km from the centre of the storm.

3. Further, the eyewall, in turn, surrounds the interior region known as the eye where the speed of the wind decreases rapidly and the air often calm.

How is Tropical Cyclone formed?

The tropical cyclone is formed when a transfer of water vapour and heat from the warm ocean to the overlying air occurred primarily by evaporation from the surface of the sea. As we know that warm, moist air rises, expands and cools, quickly and become saturated and released latent heat due to the condensation of water vapour. By this process, the column of air in the core of the developing disturbance is warmed and moistened.  The temperature difference is formed between the warm, rising air and the cooler environment that causes air to become buoyant and enhance its upward movement.

If the surface of the sea is too cool then there will not be enough heat available and the rate of evaporation will be low to provide fuel to the tropical cyclone. Even the supply of energy will also be cut off due to the warm surface water layer is not enough deep.

It happens because the tropical system modifies the underlying ocean. The sea surface becomes cool due to the falling of the rain from the deep convective clouds and the strong winds in the centre of the storm will further create turbulence. If this resulting mixing brings cool water from below the surface layer to the surface, the fuel supply for the tropical system will be removed.

Let us tell you that the vertical motion of the warm air is not enough to initiate the formation of a tropical cyclone. Therefore, if the warm, moist air flows into a pre-existing atmosphere disturbance then only development will occur.

The rising air warms the core of the disturbance by releasing both latent heat and direct heat transfer from the surface of the sea and the atmospheric pressure in the centre of the disturbance becomes lower. As a result, the pressure decreases and causes the surface winds to increase, which in turn increases the vapour and heat transfer and contributes further to the rising of the air. The core becomes warm and the increased surface winds thus fortify or reinforce each other in a positive feedback mechanism.

So now you may have understood about the tropical cyclone, types, formation and its impact.

What is the difference between storm surge and seiche?

What is Coriolis force?

The winds are driven by a low-pressure core and by the rotation of Earth. This deflects the path of the wind through a phenomenon called Coriolis force.

What are the characteristics of Tropical Cyclone?

What are the other names of Tropical cyclones?

The tropical cyclone is also known as a typhoon or hurricane.
Comment ()