Crony capitalism is an indicator of the state of the economy where success in business is determined by the mutual relationship between businessmen and government officials.

There is a proverb that there is no ‘Tantra’ (system) without the ‘Artha’(Money). The world has many systems like capitalism, communism, socialism, and a mixed economy. There are four factors of production in all these systems namely; land, labour, capital, and the entrepreneur.

The fourth factor of production (FOP) I.E the entrepreneur is responsible for many industrial revolutions in the world. But worth mentioning, the success of the entrepreneur depends on the political support of the government of the concerned country.

What is the meaning of Crony Capitalism?

Crony capitalism means a capitalist society in which the success of the business depends on the nexus between a political class and business class rather a free market and the rule of law.

The success of a business is dependent on the favoritism that is shown by the government in the form of government grants, tax breaks, allocation of legal permits, prefixed tenders, pro-businessmen policies, and other favourable incentives.

In fact, Crony Capitalism is the dominant form of capitalism because of incentives provided by the government to the capitalists. These incentives include; fostering rent-seeking activities, limiting competition, creating barriers to entry, and obtaining subsidies.

Crony Capitalism Index calculates, how much economic activity occurs in industries prone to cronyism? In the Crony capitalism index, 2014 Germany was the cleanest country where just a businessman/ billionaire of the country fetches his wealth from crony sectors.

On the other hand, Russia was among the worst countries where 18% of the country's wealth comes from the country's crony sectors. 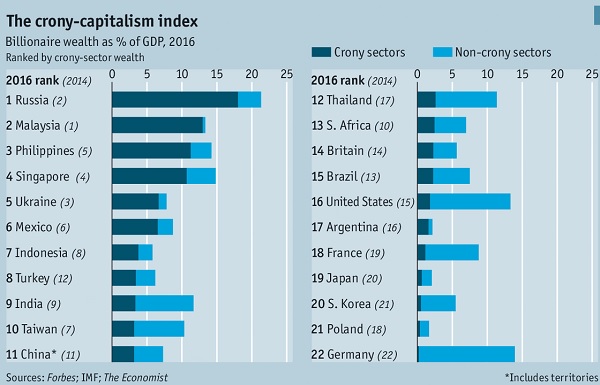 In the Crony capitalism index 2016, Russia was the worst country followed by Malaysia on the second rank, the Philippines on 3rd rank and Singapore on the fourth rank.

Due to some constraints, we can’t reveal the name of the companies and their owners who are enjoying huge benefits from Crony Capitalism.

There are many companies in India experiencing huge profits since the last 6 years. These companies are donating huge money in the name of election funds and getting back many favourable policies and tenders and enjoying huge profits. If you see the list of billionaires of India, some of them have increased their total assets many folds in the past few years.

An Oxfam report 2019, titled "Public good or Private Wealth" revealed that India's top 10% rich holds 77.4% of the total national wealth. On the other hand, the bottom 60% population holds only 4.8% of the national wealth.

The biggest aftermath of Crony Capitalism is that it is increasing the income disparity in the world on a daily basis.

How much Tax do you pay on Diesel & Petrol in India?