The Gross Domestic Product (GDP) of the Indian economy in the first quarter of the current fiscal year 2019-20 declined to six year low at 5%. In this article we have explained the reasons behind the decline in the Indian GDP.

The inauguration of the Modi Government 2.0 does not seem encouraging because the economy is showing no sign of improvement in many sectors i.e. automobile, manufacturing, FMCG, banking and agriculture. In the month of august 2019; the Central Statics Office (CSO) revealed that the real GDP growth in Q1 of the current fiscal declined to a six-year low of 5%.

It clear that no single factor is responsible for this decline. The vicious circle of poor demand is the major factor behind the whole mess up.
Let us find the reasons in this article that what are the reasons behind the decline in the Indian GDP.

Demand is the real accelerator of the economy. If demand increases then the producer has to increase the production which can not be increased without hiring the more labour force.
Increment in the employment opportunities leads to further demand of the other products in the economy. Since last few months Indian economy is facing the problem of lower demand which ultimately trapped the whole economy.

Consumption has accounted for 55-58% of GDP. Remember consumption is at the core of domestic demand in India. Indian economy experienced a sharp decline in private final consumption expenditure from 7.2% in the March quarter to 3.1% in the June.

3. Wrong procedure in the GST implementation 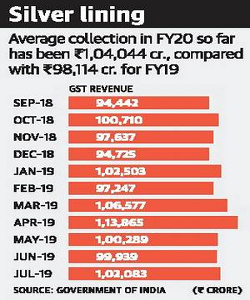 Goods and Services Tax (GST) is a very boosting step (government is getting approximately Rs. 1 lac crore per month as tax collection ) for the Indian economy but its implementation is not much smooth. The traders are facing problems in getting the GST returns and their huge money is trapped in the hands of government which is affecting their business due to limited availability of resources.

There is a 79.5% drop in the value of new projects announced during April to June 2019. This is the highest decline since September 2004. The value of declared investments in the same quarter is Rs 71,337 crore, which is also the lowest since September 2004. This is a big indication that industries are not yet confident in India's economic future. 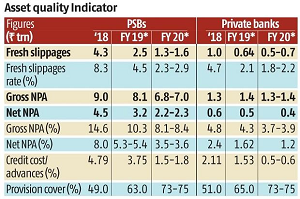 As we know that Indian banking sector is passing through a very rough time since a long time. Total NPA of the Indian banks is around Rs 7.9 lac crore which is blocking the way of new loan to the other borrowers. The recent announcement of the mergers of the banks may further create the atmosphere of anarchy in the mind of the investors and depositors.

Indian agriculture has been a key contributor to India’s growth story and continues to be one of biggest employers. It contributes around 15% in the Indian GDP and employs around 55% population of the country. But this sector is also passing through very rough time. Farmers are not getting adequate price for their crops that is why farmers are committing suicide throughout the country. 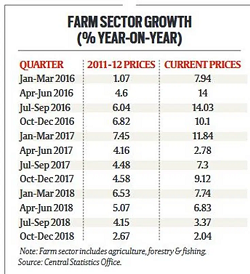 Around 12,000 farmers committed suicide in Maharashtra in the last 3 years. Now the farmers suicide rate is around 12.9 suicides per 100,000 in India.

So these 6 major reasons are behind the decline in the GDP of Indian Economy. I hope that the central government is striving hard to bring out the economy from this trap. Recently announced bailout package to banking sector,  cut in corporate tax, cut in GST rate for automobile sector and other measures will produce the favourable results for the Indian economy.

What is the Sensex and how is it calculated?