Motera Stadium in Gujarat is famous as the world's largest cricket stadium in the world. This stadium will be inaugurated by US President Donald Trump on 24th February 2020. The audience capacity of this new Motera Stadium will be 1.10 lacs. The project's estimated cost is pegged at Rs 700 crore and it would cover approx. 63 acres of land.

The Melbourne Cricket Ground (MCG), Australian also simply known as "The G", is the world's largest cricket stadium in the world. This stadium has an audience capacity of around 1,00,024 and the Field size is 171 m x 146 m.

But the Sardar Patel Gujarat Stadium, Ahmedabad will snatch this tag from MCG because now the Motera Stadium is going to be the world's largest cricket stadium soon.

1. The foundation stone of the Motera Stadium was laid in January 2018 and it is completed in 2020. It will be inaugurated by the US President Mr. Donald Trump on 24th February 2020.

Gujarat Cricket Association (GCA) handed the stadium project to Larson & Toubro (L&T) while its designing will be done by the architecture firm M/s Populous; the same firm that had designed the Melbourne stadium. 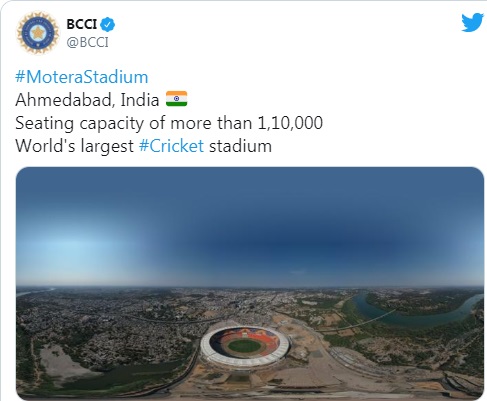 As of now the Kolkata's Eden Gardens is reportedly at number 2 with the capacity of 66,000 which would be pushed to 3rd position. Currently, the audience capacity of this Motera stadium is around 54,000.

3. This new stadium will be dispersed in 63 acres. This stadium would comprise a clubhouse with over 50 rooms, 3 practice grounds for cricketers, 4 dressing rooms, 76 corporate boxes, an Olympic size swimming pool, an indoor cricket training academy a parking area that can accommodate around 3,000 four-wheeler cars and up to 10,000 two-wheelers.

4. Motera Stadium became operational in 1983 and became popular when in 1987 when Sunil Gavaskar scored his 10,000th Test run on this ground. He was the first batsman to reach the milestone.

6. The legendary Sachin Tendulkar had scored his first double century on this ground in 1999.

Cricket in India is always treated as the religion that is why even test matches attract a lot of crowds here. As we know that India has bid to host the 2023 Cricket World Cup. So it is the need of the hour to construct world-class cricket stadiums in the country. The construction or up-gradation of the Sardar Patel Gujarat Stadium in Motera is a good step in this direction.

List of Top 10 Biggest cricket stadiums in the world

List of devices used by the Umpires in the Cricket?