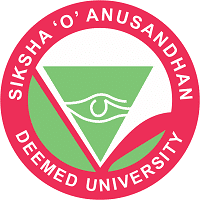 Siksha 'O' Anusandhan (SOA), formerly Siksha 'O' Anusandhan University or SOA University, is a private Deemed to be university located at Bhubaneswar, Odisha, India. The university is composed of nine degree-granting schools and colleges and has a student body of around 10,000. Many of SOA's programs are nationally accredited, including engineering, medicine, pharmacy, business, nursing, biotechnology, science, humanities, environment, nano technology, materials science, agriculture and law.

Recognizing its contribution to technical and professional education the University Grants Commission (UGC), in 2007, declared Siksha 'O' Anusandhan as a Deemed to be University by the U/S 3 of the UGC Act, 1956. In 2007, the Institute of Technical Education and Research (ITER), Bhubaneswar became a constitute institute of Siksha O Anusandhan University. Institutes, schools, and departments of SOA University are spread over 200 acres (0.81 km2) campuses in the city of Bhubaneswar.