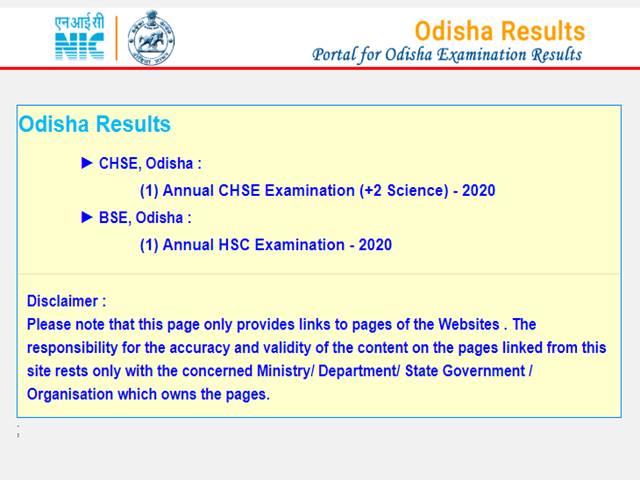 Check Odisha +2 Science Result 2020 Declared: Putting an end to the long wait, CHSE Odisha has officially announced +2 Results 2020 for Science stream students. Odisha +2 Results 2020 were declared in a formal declaration ceremony which was graced by State Education Minister Samir Dash. Mr Das formally declared the Odisha Class 12 Science Results 2020 and also announced the key highlights and statistics for the results. Following the formal declaration, students can now log onto official website i.e. chseodisha.nic.in and orissaresults.nic.in to check and access their CHSE Odisha +2 Science Scorecard online. Alternatively, the scorecard can also be accessed directly via the result checking link provided below:

According to the information provided by the Council of Higher Secondary Education, Odisha (CHSE, Odisha), Nayagarh district has emerged as the best performing district in the state for Science stream results. Nayagarh district has reported an overall pass percentage of 86.51%. On the other hand, Jharsuguda with an overall success ratio of 40.71% is the worst performing district.

According to the details shared by the CHSE Odisha, a total of 97,546 students had appeared for the +2 Science Stream Exam and were expecting their result to be declared today. Of this number, 68,374 students have cleared the exam with flying colours taking the overall pass percentage to 70.21%. Other statistical highlights for CHSE Odisha +2 Science Results 2020 are given below:

In the formal declaration ceremony held today, the State Education Minister Samir Dash officially announced the CHSE Odisha +2 Science Stream Results 2020. During the declaration function, he also announced that the overall pass percentage for Odisha 12th Science Result 2020 has been reported at 70.21%. This means the overall success ratio has fallen by small margin as last year the pass percentage was 72%.

As per the latest update, CHSE Odisha has activated the link to check Odisha 12th Result 2020 for Science stream students on the result checking portal i.e. orissaresults.nic.in. However, the official link is either not activated or has become inaccessible due to heavy traffic on the website. Many students who have tried to check their Odisha Class 12 Results 2020 have reported that the official website is inaccessible. The problem has been notified to the board and will soon be fixed. Until then, students are advised to stay tuned to this page for live updates on CHSE Odisha +2 Results 2020.

As students wait for the declaration of CHSE Odisha 12th Science Result 2020, it is natural for them to be excited and anxious at the same time. However, one way of clam down your nerves would be by looking at the performance of students in the Odisha +2 Science Result 2020 from last year and basing your expectations accordingly. To help students get an idea about how did students perform in CHSE Odisha results of previous, some key statistical highlights are listed below:

The tweet also confirmed that the formal declaration of CHSE Odisha Plus Two Results 2020 will be done by the School & Mass Education Minister Samir Ranjan Dash. Like every year, after the formal declaration, the Odisha +2 Science Results 2020 will be made available to the students online via official website i.e. orissaresults.nic.in. To be among the first students to be able to check their Odisha 12th Science Results, students are advised to click on the below-given link and register for alerts. On the day of Result, the link will be activated first and Odisha 12th Science Result 2020 will be made accessible to the students first here.

Odisha Class 12 Board Exams 2020 for +2 Students was deeply impacted by the COVID-19 outbreak in the month of March. The Class 12 Board Exams was originally scheduled to be held from 6th to 28th March 2020; however, all exams scheduled after 23rd March i.e. announcement of national lockdown, were initially postponed and later on cancelled in the light of Coronavirus pandemic threat. For the assessment of students for the cancelled papers, the Council of Higher Secondary Education has adopted an alternative assessment policy, similar to the one used by CBSE Board. As per the new policy, the board will use average marks formula to award marks to the students.

Similar to CBSE board, the CHSE Odisha has also decided to hold re-exam for students who are not happy with the score awarded to them on the basis of the internal assessment policy on average marks formula. Such students will be able to reappear for the Class 12 Board Exam at a later day, when the board feels it is feasible to hold the Class 12 Board Exams. However, if a candidate appears for the optional examination, the marks obtained will be treated as final.