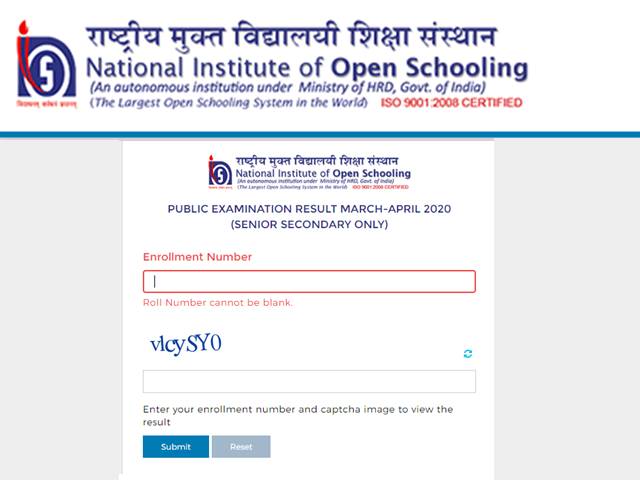 NIOS 12th Result 2020 Declared: Finally, NIOS Board has put an end to the long and agonizing wait of nearly 3 lakh students, by declaring NIOS Class 12 Results 2020 today at 5 PM. According to the official announcement NIOS Class 12 Results 2020 for Senior Secondary Public Exam of March 2020, have been officially announced by the NIOS Board. Students must note that due to COVID-19 pandemic, the NIOS Board Exams 2020 were postponed due to which the board has declared the results today on the basis of an alternative assessment policy. Following the formal announcement, students can now log onto the official website of the board i.e. nios.ac.in, to check and access their Results online. Alternatively, students can also easily access their NIOS 12th Results 2020 online via the direct link provided below, which will take them directly to the official website:

According to media reports, an official notification was also issued by the NIOS regarding the cancellation of the senior secondary and secondary examinations 2002 which were earlier scheduled to be conducted from July 17, 2020.

The Supreme Court bench of Justice AM Khanwilkar, Dinesh Maheshwari and Sanjiv Khanna hearing the petition stated that considering the fact that NIOS has already issued a notification on July 10, 2020, after the petition was filed nothing else requires further consideration in the present writ petition except that NIOS must ensure that the results for the current academic year are declared not later than August 7, 2020.

According to the marking scheme provided all the students who have appeared for the secondary and secondary examinations and have performed in four subjects in the past will be provided with the marks of the best of three subjects as the marks for their theory exams. On the other hand, those students who have performed only in three subjects the last time will be awarded marks based on the best two subjects.

Those who have appeared for only 1 or 2 subjects will be awarded marks based on the average performance in the past three public examination results.

Those students who have taken the exams for the first time the assignments or practical marks will be considered as per the performance of the past three public exam subjects for which the students have registered but could not be conducted.

This year the students have also been provided with an option to appear in the next public exam or on-demand exam which will be held once the situation resumes back to normal.