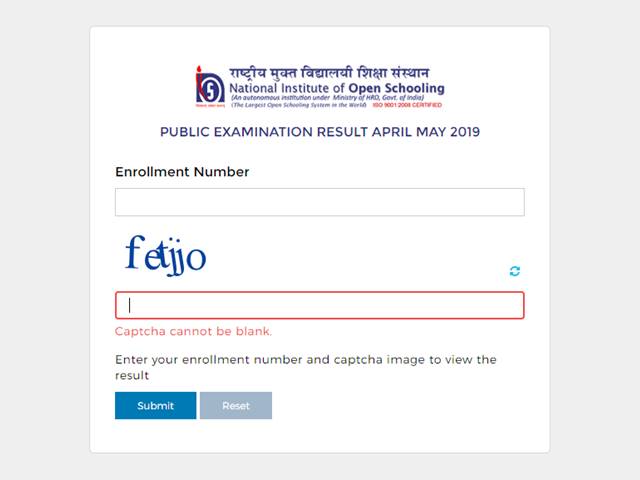 Last year the NIOS 10th Result was declared on June 4 whereas the class 12 results were announced on June 1. This year has witnessed a delay of mere few days; however, students can now access the result of their year-long hard work. The NIOS Results 2019 is now available on boards’ official website nios.ac.in and results.nios.ac.in. Alternatively, students can also access the same from the direct link given below.

The NIOS result 2019 for Class 10 and 12 to be declared is for the April exams held recently. The NIOS 10th and 12th result 2019 will be released in the online mode only. Candidates will be required to visit the official website in order to be able to access their NIOS result 2019 conveniently.

With the announcement of the NIOS 10th and 12th result 2019, candidates will be anxious to check the same immediately. So, it is important to know the process of checking NIOS result 2019 beforehand so that candidates do not face any delay later. Candidates will first be required to visit the official website – nios.ac.in and click on the link “Result of April 2019 Public Examination (Secondary and Senior Secondary). In the window that opens next, candidates must click on “On-Demand Examination Result Secondary and Senior Secondary”. Candidates will then be required to enter their enrolment number in window that pops up and click on the ‘Submit’ button. The NIOS result 2019 will then appear on the screen containing the candidates’ personal details and status of qualification in the exam along with marks obtained. Candidates must remember to download a copy of their NIOS result 2019 for future reference.